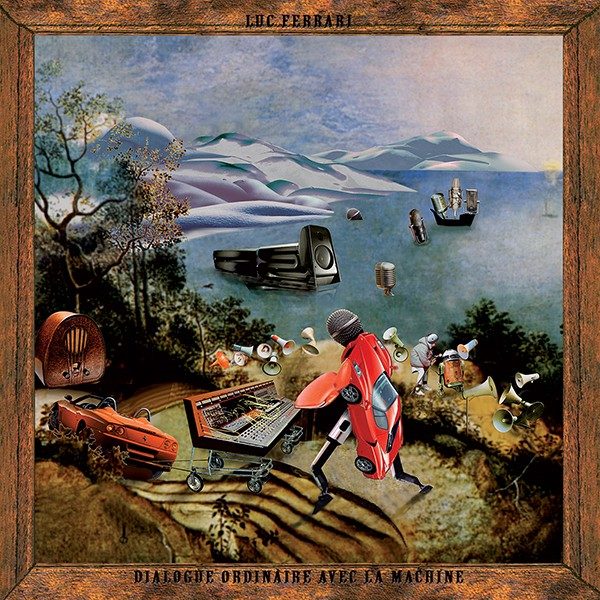 Edition of 300 copies in gatefold cover. Comes with a 30x30cm 4-page booklet with bilingual (French-English) versions of the integrated text from “Sexolidad” and the lyrics to “Love Song with the Machine”.

“Dialogue Ordinaire Avec la Machine” describes the not so chance meeting between the artists (Ferrari helped by Yannick Gornet) and the mysteriously working machine (a sampler), between the curiosity, amusement, surprise, ineptitude and excitement of the musicians and the machine with its appeal, complexity, stubbornness and synthetic eruptions. A rollercoaster through exploration, seduction, observations, misunderstandings, purrs, moans, gurgles, whooshes, loops and mechanical rhythms from which Ferrari builds his own synthesized folklore, ending with one of the most unusual episodes in the composer’s production, the rather graphically explicit and apocalyptic “Love Song With the Machine” (which, to make an unlikely comparison with younger artists, one could imagine the music of the New York duo Suicide mixed by Nurse With Wound’s Steven Stapleton).
“Sexolidad” is one of Ferrari’s most seductive instrumental pieces, representing a journey over the body, in which tonalities and their mix create “a particular harmonic climate […]. What is important is the expression this pseudo-tonal atmosphere should bring out, as a sort of sensual, and even carnal, satisfaction”. The curious concept and its musical composition result in an extremely enjoyable piece which is continuously intriguing, evocative, dauntless, persuasive and highly satisfying, exquisitely performed here by the Ives Ensemble.