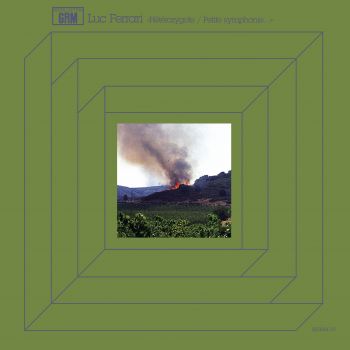 Cut by Rashad Becker at Dubplates & Mastering, Berlin, October 2016. Digital Transfer: Jonathan Fitoussi. Translations: Valérie Vivancos. Layout: Stephen O’Malley. Coordination GRM: Daniel Teruggi & François Bonnet.
“Hétérozygote” (1963–1964).
Composed between December 1963 and March 1964. In the field of biology Heterozygous (Hétérozygote) means: a plant whose heredity is mixed. It implies that this composition is an attempt to engineer a language located both on the musical and on the dramatic plane. You could call this music “Anecdotal Music” for if the organisation of events is purely musical, their choice suggests situations justified at two levels: the music and the anecdote. However, the anecdote is hardly formulated and is open to plural interpretations. The listener is then asked to imagine their own story by rejecting – if necessary – the one suggested by the author. More specifically, the author suggests an anecdotal complex, potentially bearing several meanings. The work preceded by an opening is made of eight scenes, separated (or not) by interludes. And if we wished to push the paradox further, we could say that the titles of the scenes are optional and the interludes are also scenes, etc.
Petite symphonie intuitive pour un paysage de printemps (1973–1974), 25’09
“This electroacoustic music is part of a series that could be called “imaginary soundscape”. Unlike ‘Presque rien ou le lever du jour au bord de la mer (almost nothing or daybreak by the seaside)’, where the landscape narrates itself, here a traveller discovers a landscape which he tries to convey as a musical landscape.
Brunhild and I were in the Gorges du Tarn area. We chose to take a small path that was going up a rocky mountain for about ten kilometres. After a last turn, a totally unexpected landscape opened before my eyes. It was sunset. Before us, a vast plateau spread open with soft curves up to the horizon, up to the sun. The colours ranged from dry grass yellow to purple, in the distance, with the darkness of a few small groves punctuating the space. The almost bare nature was presenting itself to the eye, free from any obstacle. We could see everything. Later, when I recollected this place and the sensations I had experienced there, I tried to compose a music that could revive this memory. The “Causse Méjean” is a high plateau, about 1000 m high, in the Massif Central mountain range. It is dotted by scattered farms. A few people bring their flocks of sheep home. I thought about evoking this solitary and hazy human presence by including snippets of conversations I had had with some of the shepherds. Human language is woven into the musical texture; the sound of the voice says more than its actually meaning. Once, a shepherd told me “… I am never bored. I listen to the landscape. Sometimes I play my flute and then I listen to the echo responding…” Thinking of him, I used the flute and its echo in my music.” Luc Ferrari. October 18, 2002
————
Ten years separate Hétérozygote, a concrete piece regarded as the first to use “anecdotal sound materials” from the Petite symphonie intuitive pour un paysage de printemps, an “attempt to musically reproduce the impression of a landscape.” Ten years out of the fifty during which Luc Ferrari’s truly unique body of work unfolded, a work free from dogma which, through a singular type of listening, wrought a hymn to the living world, to the exploration and discovery of things, men and women who inhabit it. François Bonnet, Paris, 2016