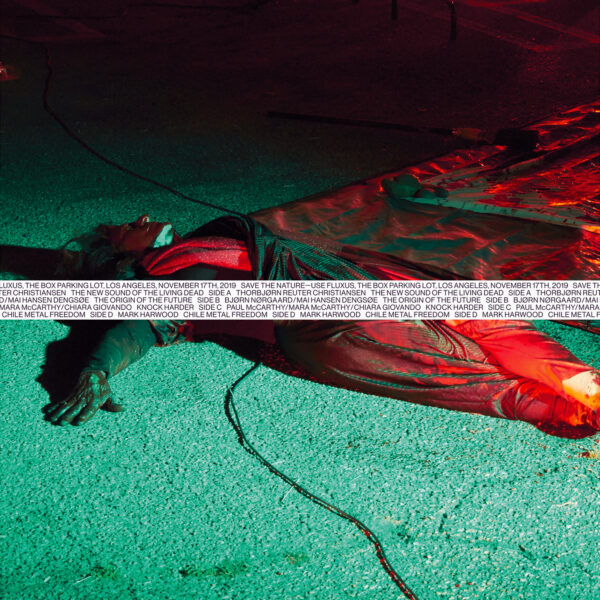 "Save The Nature - Use Fluxus, The Box Parking Lot, Los Angeles"

In November 17, 2019 a six hour performance was undertaken in the car park of The Box gallery in Los Angeles as a part of the Henning Christiansen / Ursula Reuter Christiansen exhibition They won’t survive without the bird songs. Thorbjørn Reuter Christiansen, son of Ursula and Henning, developed a timeline for the performance which was essentially designed to encompass a contemporary community of like minded artists that spans generations and continents harnessing and continuing the work instigated by Henning during his lifetime. The resulting performance included archival recordings taken from the H.C. Archive, which houses a vast collection of compositions, scores and correspondence of the late Christiansen.

This limited edition 2LP collects edited highlights from the day capturing the unique and somewhat unsettling atmosphere provoked by a diverse range of performances.

Thorbjørn Reuter Christiansen developed a new action where he performed a sound piece on iconic instruments of Henning’s alongside recorded sounds of his father. Father and son re-united again in performance. The New Sound of the Living Dead.
Bjørn Nørgaard presented two new iterations of some of his historical actions; Homage to Henning and Joseph, Manresa, a piece he first collaborated on with Henning Christiansen and Joseph Beuys at Galerieleri Schmela in Düsseldorf in 1966, and The Cake, a live construction of a monolithic yet impermanent sculpture meant to decay over time. Mai Dengsøe Hansen performed EURASIENSTAB fluxorum organum op. 39, a piece for organ that Henning scored and used as the soundtrack for the film Eurasienstab, with Beuys.
The BOX gallery founder Mara McCarthy, along with her father Paul McCarthy and Chiara Giovando performed Knock Harder, a 20 min. improvisation that loosely recalls Knocking, a sound scape Henning used repeatedly throughout many of his own compositions. Chiara and Mara can be heard singing and playing a selection of small instruments, while Paul methodically slammed the back door of the gallery with a piece of scrap 2×4 pinewood – a kind of dedication to the monotony of Fluxus.

Mark Harwood, the founder of the expansive experimental independent label Penultimate Press performed an improvised musical protest incorporating fire, rhythm and chaos alongside field recordings of the civil unrest in Chile that he collected occurred just prior to the opening of this exhibition. Harwood’s contribution speaks to Hennings political activism and dedication.

Throughout SAVE THE NATURE —- USE FLUXUS all came together to celebrate these great artists and to embody the same spirit of communal collaboration that has so thoroughly been a part of both Ursula and Henning’s lifelong endeavors.

2LP’s held together with a printed rubber band, 4 large full colour double sided art cards documenting the performances, a substantial booklet/catalogue about the exhibition, a large poster featuring a drawing by Paul McCarthy made during the performance.