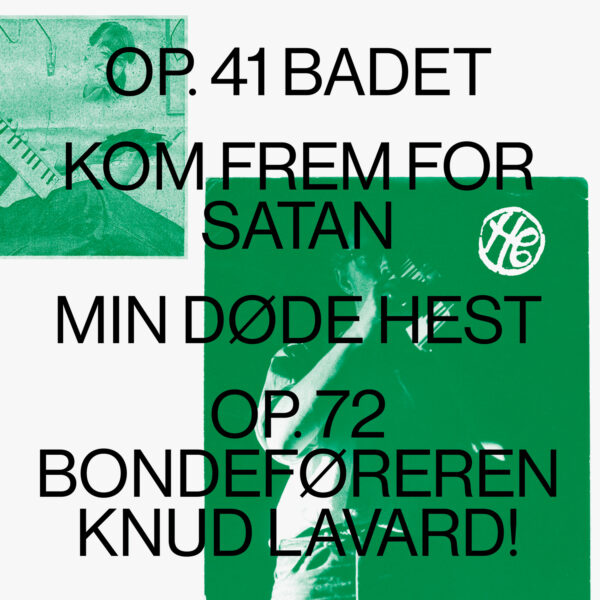 The second release on the Henning Christiansen Archive is a compilation of four works from 1967-1972 including a poem set in a bath, an unknown musical work, the musical backdrop to a horse sacrifice and a soundtrack to a school play. What binds these works together alongside the period when written is their basis in ‘song’ and some traditional ‘musical’ elements. What separates it from said tradition is that they were composed by Henning Christiansen.
Op.41 Badet is a simple work featuring 3 elements: Charlotte Strandgaard reading her poem Badet (The Bath), Henning playing melodica and the sound of water splashing in a bath. The result is an unusual and evocative lo-fi setting to the resigned nature of the reading.
Not a lot is known about Kom Frem For Satan (Come Forward Satan). Possibly a soundtrack of sorts? It certainly carries that mood with it’ jazz inflicted interludes, melodic organ moments all interlaced with the diegetic sounds of cars, footsteps, gunshots, etc. The result comes across like a gangster tinged musique concrete radio play. Kom Frem For Satan also shares musical motifs that appear in Op.72 on side two of the lp.
Min Død Hest was previously released as a single sided 10” under the name Hesteofringen, here restored under it’s correct name. Min Død Hest (My Dead Horse) was written to accompany the Bjørn Nørgaard performance Hesteofringen (The Horse Sacrifice) on the 30th of Jan 1970, one of the most notorious performances in Danish art history. Featuring a poem written by Lene Adler Pedersen, this is a recording made after the performance with Lene Adler Pedersen singing, accompanied by Christiansen on piano (as opposed to the green violin he used in the performance), Min Død Horse is a beautiful haunting fragile song laden with metaphor, a sad lullaby is as simple and unusual as anything in Christiansen’s output.
Op.72 Bondeføreren Knud Lavard is a the soundtrack to a school play performed on at the Fanefjord School on the island of Møn, Denmark, where he lived, in 1972. Another surprising work in Christiansen’s oeuvre the 6 pieces that make up this work shift between the sinister and sweet, often in the same track. Falling within the same period Henning made the soundtrack to The Executioner, Bondeføreren Knud Lavard mixes the melancholic romantic mood of that soundtrack whilst deep organ chords, military drumming and an acoustic guitar solo (played by Henning’s first son Esben Christiansen) all make an appearance.
This is an sublime collection from one the 20th Centuries most diverse composers at the bridge between his romantic and avant-garde phases.

Limited LP in an edition of 500 copies with large bespoke fold out sleeve on craft board with white reverse, printed inner sleeve, A2 poster, postcard.
Compiled by Thorbjørn Reuter Christiansen and Mark Harwood.
Mastered by Giuseppe Ielasi