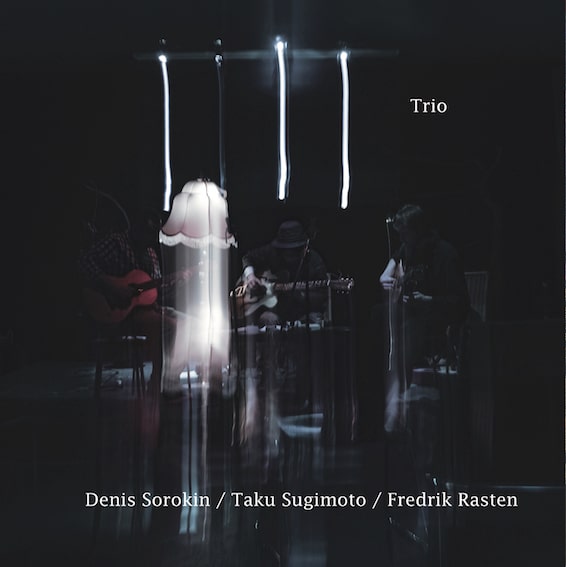 Taku Sugimoto from Tokyo, Denis Sorokin from Saint Petersburg and Fredrik Rasten from Oslo. The three met in Berlin in early March, 2019, and immediately hit it off–not only because they’re all guitarists, but also because they have similar musical leanings. Over the three-day period of March 7-9, they met for recording sessions at Petersburg Art Space Berlin. The ten tracks on this 2-CD set are trio performances recorded at that time.

For the recording, Taku Sugimoto provided six compositions and Fredrik Rasten prepared four. Some of Sugimoto’s tracks include performances of more than one composition, and performances of six pieces are contained in five tracks. The remaining track is an improvised performance. All three musicians used acoustic guitars in every performance. Denis Sorokin also used pitch pipes and tuning forks on some tracks, and Fredrik Rasten’s voice can be heard from time to time in the improvisation. Throughout, the pieces and performances are exquisitely matched and the beauty of the acoustic guitar ensembles is remarkable. The album is sure to give the listener a feeling of serene contentment.

Composer/guitarist Taku Sugimoto has earned critical praise and popularity inside and outside Japan, and has numerous CD releases on the Ftarri and Meenna labels. Guitarist Denis Sorokin, who is especially well known for his performances of Wandelweiser compositions, participated in Sugimoto’s CD Guitars, released on Meenna in 2019. Fredrik Rasten is also a guitarist/composer active in the experimental music field. He has releases on labels such as Edition Wandelweiser (Germany) and Sofa (Norway).