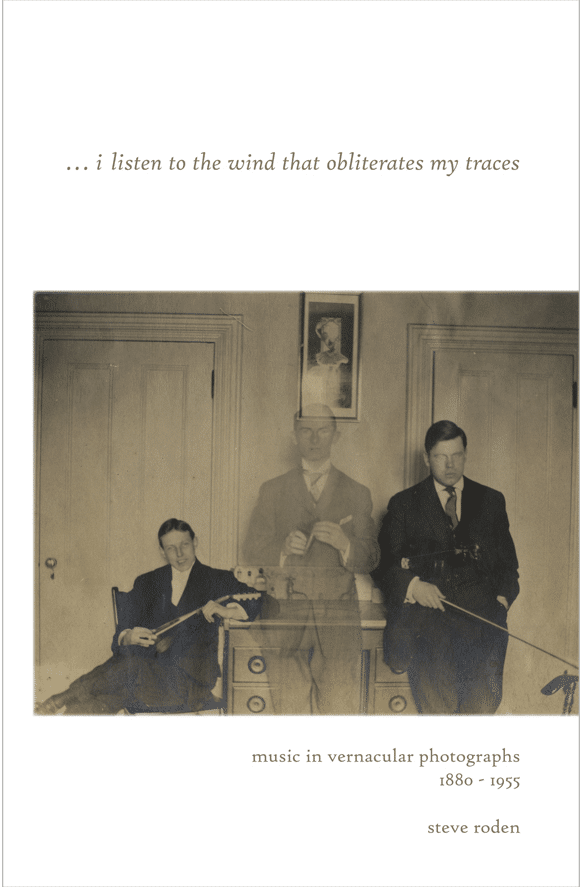 “…i listen to the wind that obliterates my traces”

Edited by Steve Roden. 184 page hardback book with 2 CDs. 150 full-color photographs. The CDs feature 51 vintage recordings from 1925-1955.
“… i listen to the wind that obliterates my traces brings together a collection of early photographs related to music, a group of 78rpm recordings, and short excerpts from various literary sources that are contemporary with the sound and images. It is a somewhat intuitive gathering, culled from artist Steve Roden’s collection of thousands of vernacular photographs related to music, sound, and listening. The subjects range from the PT Barnum-esque Professor McRea – “Ontario’s Musical Wonder” (pictured with his complex sculptural one man band contraption) – to anonymous African-American guitar players and images of early phonographs. The images range from professional portraits to ethereal, accidental, double exposures – and include a range of photographic print processes, such as tintypes, ambrotypes, cdvs, cabinet cards, real photo postcards, albumen prints, and turn-of-the-century snapshots. The two CDs bring together a variety of recordings, including one-off amateur recordings, regular commercial releases, and early sound effects records. there is no narrative structure to the book, but the collision of literary quotes (Hamsun, Lagarkvist, Wordsworth, Nabakov, etc.). Recordings and images conspire towards a consistent mood that is anchored by the book’s title, which binds such disparate things as an early recording of an American cowboy ballad, a poem by a Swedish Nobel laureate, a recording of crickets created artificially, and an image of an itinerant anonymous woman sitting in a field, playing a guitar. The book also contains an essay by Roden.”