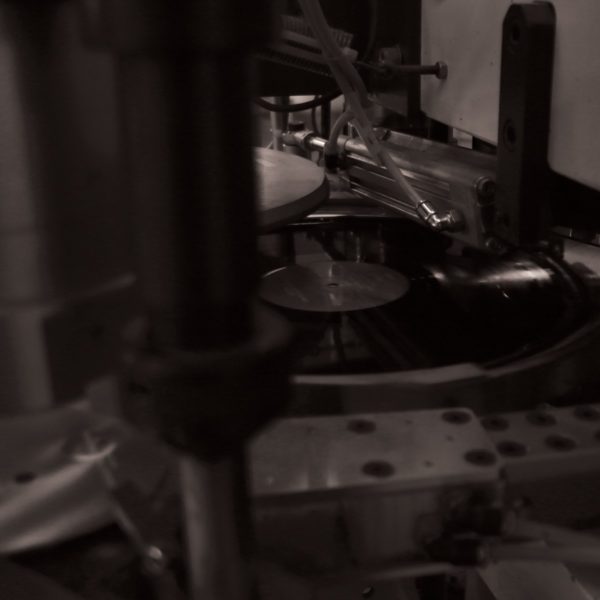 Universinternational & Artkillart — Ui024 + AKA16
Press completes a “mechanist” trilogy, started by Pali Meursault with Offset in 2013 and Mécanes in 2016. Following the investigation of gestures and machines cycles in printing and letterpress workshops, this new work is a mise en abyme of the record as an object, created from field recordings of a vinyl record pressing plant: Rand Muzik in Leipzig.
Composed in the studios of GRM, Press is a piece of industrial musique concrète. The microphonic explorations of factory noises, as “byproducts” of the fabrication process, reveal the pulsations, rhythms, frequencies and sequences of an electroacoustic matter that seem to be already pointing to industrial and electronic music. Noise is apprehended as a social and cultural phenomenon, which attests of both a production process and an auditory culture.
The piece fills the first side of the record with three “movements” that correspond to the three main stages of the record fabrication: electrotyping, pressing, and packaging.
The second side is a deconstruction of the first one, presenting 33 locked groves. The medium conditions the shape of sound by imposing the never-ending repetition of the 1.8 seconds in take to complete a rotation.
Sound matter recorded in the R.A.N.D. muzik pressing plant in Leipzig. Music composed in the studios of GRM in Paris. Lacquer cut at DK Mastering by Hervé de Kéroullas.
Thanks to François Bonnet, Jan Freund, and Víctor Mazón Gardoqui.
Limited edition of 300 copies.