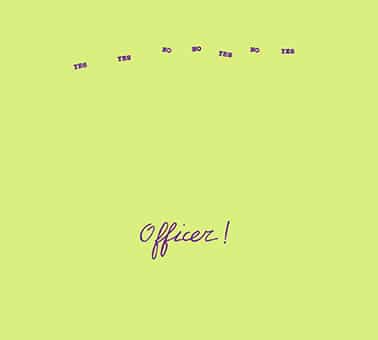 Officer! was founded by Londoner Mick Hobbs. His roots were in the Rock In Opposition scene of the late 70s and early 80s. Initially he worked as guitarist in The Work, subsequently he became closely associated with This Heat and their Cold Storage Studio in Brixton, working with artists like Family Fodder, Catherine Jauniaux or Zeena Parkins. The band’s first album “8 New Songs By Mick Hobbs” came out in 1982 on casette only. It was followed by the second album, “Ossification”. The third album, “Cough” was recorded and released in France in 1985. It is often overlooked in the band’s discography, a fate that many cassette releases share. “8 New Songs By Mick Hobbs” and “Cough” have been collected to form the CD “Earlier Music”, which is also available from Klanggalerie. “Yes Yes No No Yes No Yes ” was the band’s fourth album and came out as a vinyl LP in 1988, released by the band themselves. It was recorded in France and England between 1986 and 1988. Performing on the album are Antoine Gindt, Bill Gilonis, Claudia Schmid, Daniel Koskowitz, Felix Fiedorowicz, Keisuke Matsui and of course Mick Hobbs. Hobbs is a songwriter with a gift for plangent melody, ingenious arrangement and lyrics at once caustic and courtly, playful and profound.