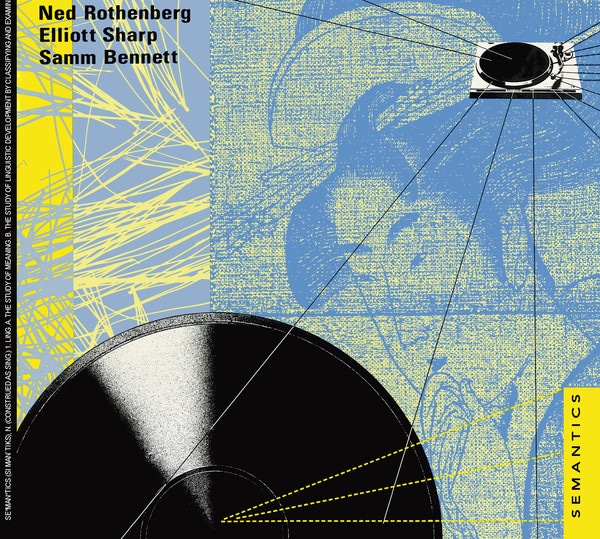 Semantics was a jazz supergroup consisting of Elliott Sharp, Ned Rothenberg and Samm Bennett. Elliott Sharp, born in Ohio in 1951, began playing the piano at the age of six and started to perform concerts two years later. He soon gave up the piano, first in favour of the clarinet and later for the guitar. Sharp became intrigued with all types of experimental music, from contemporary classical to free jazz and sophisticated rock. He studied anthropology at Cornell University, where he played in a band and took an electronics class with synthesizer inventor Robert Moog. Ned Rothenberg is an American multi-instrumentalist who was born in 1956 in Massachusetts. He has been internationally acclaimed for both his solo and ensemble music, presented for the past 33 years on 5 continents. He performs primarily on alto saxophone, clarinet, bass clarinet, and the shakuhachi – an endblown Japanese bamboo flute. His solo work utilizes an expanded palette of sonic language, creating a kind of personal idiom all its own. Samm Bennett was born in 1957 in Alabama. In 1977 he moved to Boston, a town that seemed to offer broader possibilities for a young musician eager to play and grow and try new things. It was there that he was first exposed to African drumming styles, mostly through attending weekly drum ensemble workshops led by Boston underground percussion legend Syd Smart. In late 1980, he went to Nigeria, West Africa. Traveling with a friend who introduced him to a family in Benin City, Nigeria, he remained there as their guest for six months, making daily trips to the home of drum master Idemudia Izevbihen. Later Bennett lived in Brussels and played many solo shows. The short lived Semantics were active in the middle of the 1980s and released two albums. The self-titled debut has so far never been released on CD. It is a masterpiece of contemporary jazz with a rock attitude added for good measure.