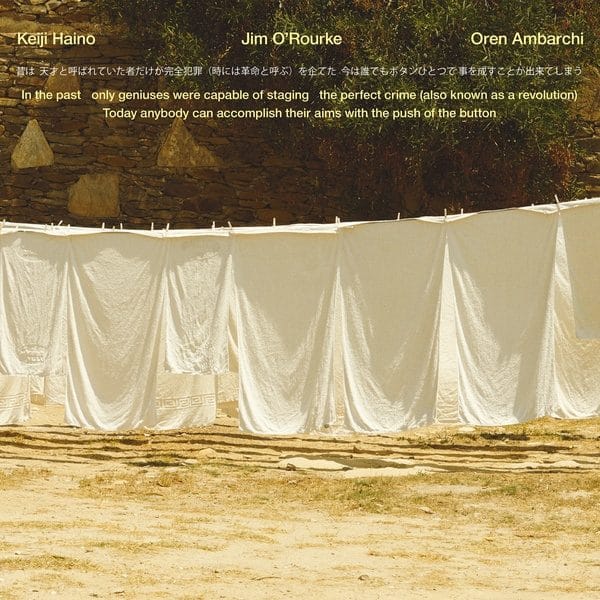 For its 50th release, Black Truffle presents the ninth album from one of the label’s core ensembles, the power trio of Keiji Haino, Jim O’Rourke, and Oren Ambarchi. Drawn from a November 2015 performance at Tokyo’s now-defunct SuperDeluxe, the record’s opening piece drops us immediately into the maelstrom, abruptly cutting into an extended episode of Ambarchi’s pummeling drums, O’Rourke’s fuzzed-out six-string bass, and Haino’s roaring guitar and electronics. Eventually settling into a hypnotic bass and drum groove over which Haino unleashes some almost Ray Russell-eque skittering atonal screech, these opening 13 minutes act as a potent reminder of the trio’s power.

Alongside showcasing the steady development of a unique language for the guitar-bass-drums power trio, the group’s succession of releases over the last decade has demonstrated a constant experimentation with new instruments, which continues here with O’Rourke use of Hammond organ (played at the same time as his roaming, sometimes knotty basslines). On the album’s second piece, the organ plays a key role, furnishing a harmonically rich shimmer over O’Rourke’s angular six-string bass chords, Haino’s distant, chirping electronics and Ambarchi’s crisp cymbal work; arriving somewhere halfway between Albert Marcoeur and Terje Rypdal, this piece is undoubtedly a highlight in the trio’s catalog so far.

The second and third sides are slow-burning, multi-part epics that range from spacious reflection to furious tumult. Where the trio’s previous double-LP set — This Dazzling, Genuine “Difference” Now Where Shall It Go? (BT 030LP, 2017) — was primarily instrumental in focus, here you find Haino’s voice taking the spotlight on the expansive third side, intoning, wailing. and exhorting in Japanese and English over a backdrop that moves from hushed bass and organ atmospherics to rolling toms and cymbal crashes before arriving at an ecstatic finale of searing guitar, tumbling drums and reverb-saturated bass. The fourth side returns to the hypnotic grooves of the opening piece, fixing on a relentless riff and riding it into oblivion under Haino’s roaming psychedelic soloing and jagged chordal slashes.