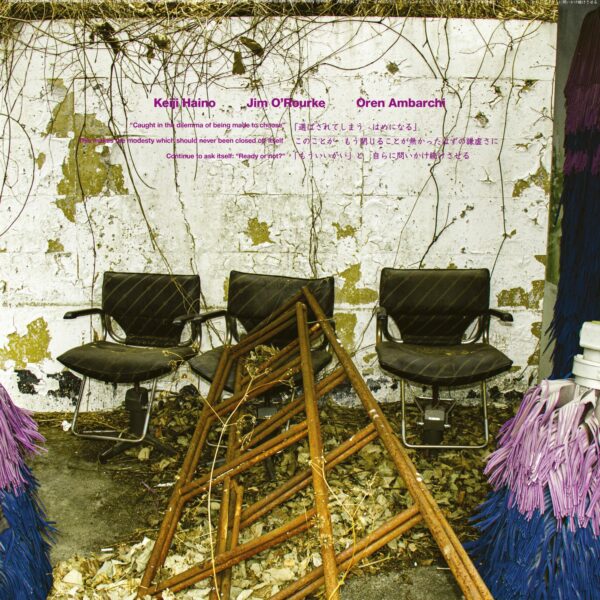 "Caught in the dilemma of being made to choose"

The renowned trio of Keiji Haino, Jim O’Rourke and Oren Ambarchi return to Black Truffle with their 11th release, “Caught in the dilemma of being made to choose” This makes the modesty which should never been closed off itself Continue to ask itself: “Ready or not?” Demonstrating once again their commitment to continual experimentation in instrumentation and approach, the record begins with a long-distance collaboration made in response to a commission from New York’s Issue Project Room in 2021 during widespread lockdowns and travel limitations. A unique piece in the trio’s extensive body of work, this side-long epic finds Haino performing on metal percussion, O’Rourke on electronics and Ambarchi on gongs and bells. Initially dominated by rapid patterns on resonant, high-pitched tuned percussion, the piece sets Haino’s dynamic and dramatic performance against a calm backdrop of cycling electronics, thrumming gong strikes and hanging bell tones. The performance develops a heightened, intensely concentrated atmosphere reminiscent of Haino’s classic Tenshi No Ginjinka or his Nijiumu project; when Haino moves to clashing hand cymbals in its second half, the piece’s ritualistic energy suggests aspects of the music of Tibetan Buddhism.

The remainder of the double LP documents the trio live at Tokyo’s SuperDeluxe (the location of all but their very first recording) in a wide-ranging set recorded in December 2017. The concert opens, in another first for the trio, with Haino on drums, O’Rourke on Hammond organ and Ambarchi on his signature Leslie cabinet guitar tones. Haino’s explosively untutored approach to the drumkit will be familiar to some listeners from the radical duo iteration of Fushitsusha heard on Origin’s Hesitation. Setting flurries of rapid activity against moments of silence, his drumming here at times suggests Milford Graves in its tumbling toms and thudding kick-drum propulsion. Accompanied by O’Rourke’s organ and Ambarchi’s guitar, which in their shared use of long tones and shifting modulation speeds almost blend into a single voice, the opening sections of this performance are some of the most magical music the trio has committed to tape thus far.

After an interlude of spoken vocals in both Japanese and English, Haino makes a dramatic entrance on guitar. Against O’Rourke and Ambarchi’s increasingly intense electronic backdrop, Haino unleashes a stunning passage of slowly moving chromatic melodies and sudden shrieking explosions bathed in distortion and reverb. By the time we reach the third side, the guitar/bass/drums power trio is established and lurches into a passage of massive, lumbering rock that threatens to fall apart at every beat, O’Rourke’s strummed chordal work on six string bass creating a harmonic density equivalent to a second guitar. An abrupt edit throws the listener in media res into a frantic locked groove grounded by fuzzed out bass patterns and caveman drums. As Haino moves through a variety of approaches, from massive edifices of stuttering fuzz to ominous swarms of feedback, the trio eventually stumble into a kind of Harmolodic military tattoo, Haino’s guitar weaving and slashing across the rhythm section’s irregular accents. Moving through an epic opening duet for O’Rourke on Hammond and Haino’s wailing guitar, the fourth side eventually ramps up into a frenetic finale of mad bass riffing, crackling snare hits and guitar squall.“Caught in the dilemma of being made to choose” This makes the modesty which should never been closed off itself Continue to ask itself: “Ready or not?” is a testament to the continuing power and invention of this trio, who continue to seek out new terrain after over a decade working together. 2LP set presented in a lavish gatefold sleeve on heavy stock along with inner sleeves containing live pics by Tsuyoshi Kamaike. Photography by Jim O’Rourke, design by Lasse Marhaug and translation by Alan Cummings.