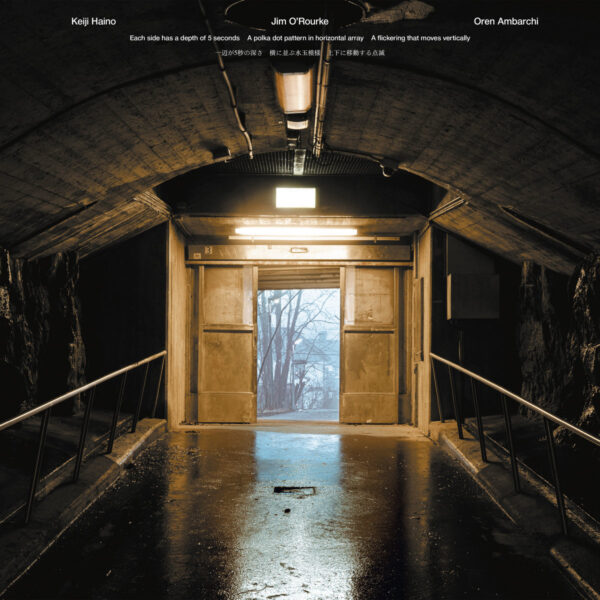 The trio of Keiji Haino, Jim O’Rourke, and Oren Ambarchi return to Black Truffle with their 10th release, recorded live in Tokyo in February, 2017. While many of the trio’s recent works have seen them focussing primarily on their core guitar/bass/drums power trio format, on Each side has a depth of 5 seconds A polka dot pattern in horizontal array A flickering that moves vertically these three multi-instrumentalists strike into new territory, utilising an almost entirely electronic set-up, with Haino on electronics, drum machine and suona (a Chinese double-reed horn), O’Rourke on synth, and Ambarchi on pedal steel and electronics.

Dedicated to the memory of legendary Tokyo underground figure Hideo Ikeezumi, founder of PSF Records and the Modern Music shop and a long-term collaborator with Haino, the LP, (recorded the night Ikeezumi passed away), begins in a sombre, meditative space of rippling, burbling electronics and distant jets of white noise. Though much of the ‘Introduction’ that occupies the record’s first side is spacious and at times almost hushed, the performance is full of unexpected twists and turns, momentary events, and fleeting impressions. The trio conjures up a free-flowing surge of sound in which individual contributions are often difficult to distinguish, calling up echoes of vintage live-electronic sizzle like It’s Viaje or the cavernous expanse of David Behrman’s Wave Train.

The LP’s second side opens in a similarly reflective realm, before Haino’s suona enters, taking the music in a more austere, hieratic direction, as the reed’s piercing tones are accompanied by O’Rourke’s uneasy, sliding synth figures and Ambarchi’s shimmering Leslie cabinet tones. On the side’s second piece, Haino’s signature hand-played drum machine takes centre-stage, at first sounding out massive, isolated strikes, before eventually building to a tumbling, Milford Graves-esque wall of thunder. As O’Rourke’s synth squelches and stutters and Ambarchi’s heavily effected pedal steel somehow begins to sound like a kind of hellish blues harmonica, this passage offers up one of the most electrifying and bizarre moments in the trio’s catalogue to date.

Containing some of the most abstract music the trio have waxed since their very first collaboration over a decade ago (Tima Formosa, BT04), this new missive from underground experimental music’s preeminent power trio shows them restless and risk-taking, clearly enjoying their remarkable improvisational chemistry while also continuing to push themselves into new directions.

Presented in a deluxe gatefold sleeve with artwork and design by Lasse Marhaug and an inner sleeve with live pics by Ujin Matsuo.