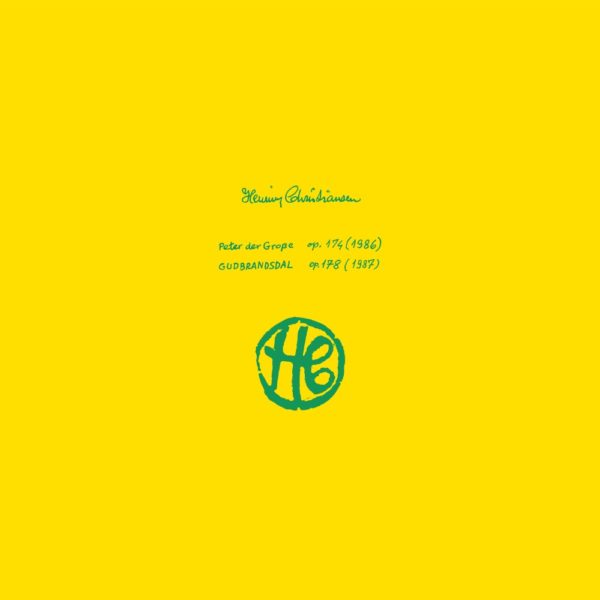 Two of Henning Christiansen’s tape works from the 1980’s, Peter der Große and Gudbrandsdal, are now released for the first time by the Institute for Danish Sound Archaeology. Originally composed for different contexts – Peter der Große as the score for a German radio feature and Gudbrandsdal for a performance in collaboration with Joseph Beuys and later Bjørn Nørgaard – the two works stand out in Christansen’s many-faceted oeuvre by employing almost entirely electronic sounds. Two absolutely enthralling and immersive pieces of tape music, now available for the first time. Background
With a career spanning six decades Henning Christiansen (1932-2008) was prolific as a composer, sound artist, and visual artist. Having studied composition at the Royal Danish Conservatory, Christiansen took a sharp turn towards the experimental art scene in the 1960’s and got involved with Fluxus and the Danish Experimental Art School, Eks-Skolen. In 1964, Christiansen met German artist Joseph Beuys, and they quickly started working together. During the sixties, Christiansen became a central collaborator for Beuys and created sounds for several of his actions using multiple tape machines, often on stage with Beuys, playing back mixes of his own compositions as well as recordings made specifically for the actions. In the seventies, Christiansen took another sharp turn: instead of Fluxus, performances and conceptually based art music, he began composing in a neo-romantic style with classical forms like waltzes, symphonies, and songs in the Danish song tradition. Return to tape music Around 1984, Christiansen returned to the artistic strategies he had left in the late sixties with a renewed commitment to his own vision of Fluxus. The following years were some of Christiansen’s most prolific – and also the period in which he composed some of his very best tape works. During these years, Christiansen also worked intensely as a visual artist, integrating performance art, sound, and visual art. During the eighties and nineties, Christiansen created tape music as commissions for theater productions, for radio, and performances – a large part of which have never been released. Neither of the two tape works on this release have been issued before. Peter der Große op. 174 (1986) and Gudbrandsdal op. 178 (1987) are close in time and both of them were created with the technical assistance of sound engineer Ernst Ludwig Kretzer, who worked on and contributed to several of Christiansen’s tape works and performances in the mid-to-late eighties. Peter der Große stands out in Christiansen’s body of work by involving electronic instruments like synthesizer and a crackle box, while Gudbrandsdal employs a more minimal approach and aesthetics through the heavy use of echo effects and manipulation of the tape speed. Gudbrandsdal was created for the performance Tiefland (– som det stiger frem) [Lowlands ( – as it rises up). Tiefland was a originally thought of as a series of performances that Christiansenhad been planning with Joseph Beuys since 1980, and when Beuys died in 1986, Christiansen instead collaborated with artist Bjørn Nørgaard on the project. Both of the tape works carry a heavy atmospheric tone and are set in a largely electronic sound world – something quite unprecedented in regard to Christiansen’s extensive and many-faceted oeuvre. First and foremost, these are two enthralling and immersive pieces of music, that now see their first release.
Double 180g LP + digital, housed in reverse-printed gatefold cover.