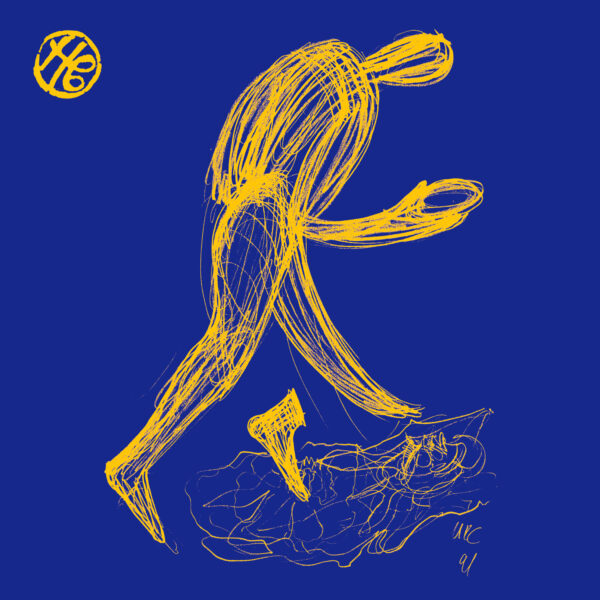 Ursula and Henning met the couple Carlo Quartucci and Carla Tatò through the curator Johannes Gachnang on a visit to Genazzano in Italy 1983 and became close friends, collaborating on a variety of projects, most notably on Carlo and Carla’s epic adaptation of Heinrich von Kleist’s play Penthesilea (forthcoming on The Henning Christiansen archive).
The Wandering Human Being – The Wandering Voice came about from a conversation between the four of them whilst on a beach on the island of Møn in the eastern sea in Denmark, looking south. Here they all laughed at the realisation that on the other ide of Europe in this direction was Sicily where Carlo and Carla lived. The island Sicily, The island Møn. As Henning says “The human-being was wandering from sea to sea”. Henning saw no difference in their way over life ‘over there’ and mused on the means of which we cross over oceans and move around facilitating awareness of the same family of human being. People from islands meet people from islands and they can all look across vast waters and laugh together.
This conversation and collective realisation of the simplicity of it all lead to this work which is one of the finest in Henning’s vast catalogue. L´essere Umano Errabando La Voce Errabando is a mantra for four voices, the sound of the ocean, a pvc tube, effects and wind instument. The piece moves in an organic hypnotic fashion lulling and rolling, ebbing and flowing over the two sides of the record. Rudimentary phrases in various languages interlope and weave a mystical music, as primitive as it is ‘contemporary’.
The Wind, The Stars, etc are repeated over in random untrained fashion. The two couples from different countries weave voices, words and language into a common sonic fabric which eradicates identity, the idea of ‘national’, the idea of country, the idea of difference.
Unlike anything else in Henning’s output L´essere Umano Errabando La Voce Errabando is a calm and meditative work which rolls along two sides wrapping the listener in a random melancholic meditative mantra. Only Henning Christiansen could summon such haunting, beautiful, gothic music carved from political hope.

Limited LP in an edition of 500 copies with large bespoke fold out sleeve on grey board with white reverse, printed inner sleeve, 195 x 280 booklet.
Mastered by Giuseppe Ielasi