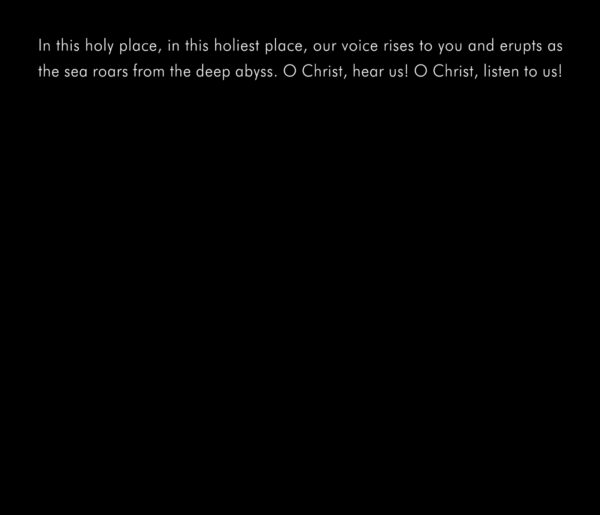 “In 2001 ARTUR ŻMIJEWSKI created the first part of the project “SINGING LESSON” in the Augsburg Evangelical Holy Trinity church in Warsaw. Accompanied by an organ a choir of ‘deaf-mute’ children sang the “Kyrie” from the “Polish Mass” by Jan Maklakiewicz (1899-1954). Among the cacophony of sounds uttered by them you can hear the words of the confession of faith: “In this holy place, in this holiest place, our voice rises to you and erupts as the sea roars from the deep abyss. O Christ, hear us! O Christ, listen to us!”. The second part of the project (“Deaf Bach”) was realized in 2002 in St. Thomas Church in Leipzig, in which Johann Sebastian Bach for many years was a cantor and where he was buried. ‘Deaf-mute’ or severely hearing-impaired children sang Bach’s cantata “Herz und Mund und Tat und Leben” (Heart and Lips and Deed and Life).” (from the liner-notes)

“Along with admiration for the efforts of the deaf we feel an uneasiness caused by our deeply hidden aversion towards that which – like cripplehood – was removed from our consciousness: fear of ourselves, which is an inner mold of repulsion projected onto outside phenomena. Żmijewski’s works convince us that neither suffering nor different kinds of physical dysfunction or social norms are able to kill the joy of life. The children singing Bach every so often snort with laughter as if they were trying to accustom themselves to the situation in which they found themselves, thus making it “normal”. They whoop it up, forgetting the fact that the lesson in which they participate is beyond the social role ascribed to them, that it is an anomaly, a freaky idea. It is also a musical hybrid, a mix of the sounds uttered by the deaf children and the voice of a professional singer, a negation of all the rules, a mixture of the evenly-tempered baroque system and elements of modal and atonal music.” (Violetta Sajkiewicz)

Polish artist Artur Żmijewski (born 1966 in Warsaw) is one of the most consistently challenging, provocative and profoundly thoughtful artists working today. He is an author of short video movies and photography exhibitions, which were shown all over the world. Żmijewski does not shy away from putting the generally accepted rules of Political Correctness into question. His works on the mentally and physically handicapped has drawn significant public attention. He appears to be an artist always in constant search of the next modality of artistic expression, ever striving to amplify the impact of his art on its subjects, enlarging its territory beyond its conventional borders. During the 1990s, Żmijewski was a leading force in the realm of critical art, his point of departure being the problems of body and The Other. In 2005 he represented Poland at the 51st Venice Biennale. He exhibited at Documenta 12 (2007), Manifesta 4 (2002), Wattis Institute for Contemporary Art, San Francisco (2005), Kunsthalle, Basel (2005), National Gallery of Art Zacheta, Warsaw (2005), Kunstwerke, Berlin (2004), Museum of Modern Art, New York (2009), Cornerhouse, Manchester (2009) and many more. He was the curator of the Berlin Biennale 2012.
CD in 8-panel digipak. Edition of 300 copies.