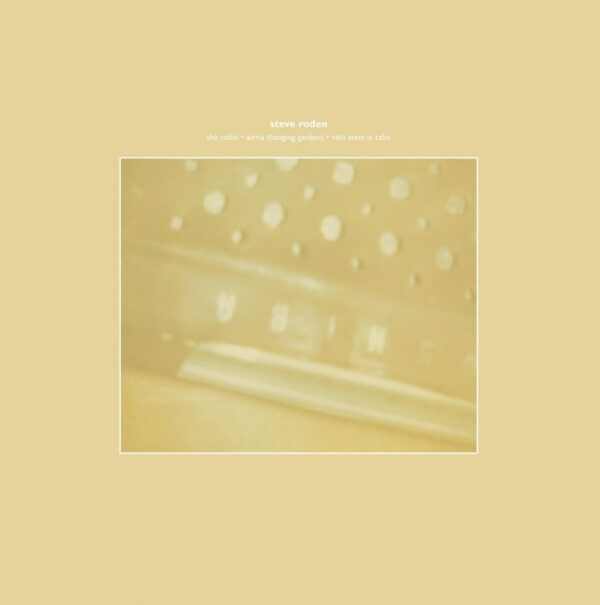 Sonoris is pleased to announce the release both on vinyl and cd, with a new mastering by Giuseppe Ielasi, of some important works from the influential and respected artist Steve Roden. These tracks, which mix conceptual composition and musicality, transcend the ambient or lowercase categories too quickly applied to his music, due to its ghostly beauty.
_
In the tradition of John Cage’s Cartridge music amplified objects, Steve Roden extracts a fine and delicate music through his manipulation of specific objects, with an apparent simplicity that hides a captivating magic. Whilst reinventing a form of ambient music which is discreet and atmospheric, Steve Roden delivers sound textures, gives shape to color swatches, traces vibrant frequencies and creates visual art objects.
Roden, both a visual and a sound artist often tagged as minimal for want of a better description, builds the sound design of a life, a new construction for the future which encompasses architecture, visual arts, and painting in a single form.

• The radio (1996): The sound sources are derived from the object itself: the airwaves as well as the internal mechanics (aerial,springs, knobs …). Originally released as a miniCD by Sonoris, this work centered on Roden’s voice and found sound loops is now unexpectedly considered a classic and was seen as “a particularly modest form of genius” in a review by The Wire at the time.
• Airria ( hanging garden ) (2003): Arnold Schönberg’s work ” The book of hanging gardens ” haunts the piece, and is used as a backbone over which a ghostly and exhilarating vocal hovers. Both unsettling and relaxing, this track from the “Speak no more about the leaves” CD has strangely become a mini phenomenon on youtube with its number of views and comments.
• Vein stem is calm (1996): A few seconds taken from a Ralf Wehowsky piece are shaped into a nocturnal raga imbued with substances of an indeterminate nature.
_
Steve Roden is a visual and sound artist from Los Angeles, living in Pasadena. His work includes painting, drawing, sculpture, film/video, sound installation, text and performance. In the sound works, singular source materials such as objects, architectural spaces, and field recordings, are abstracted through humble electronic processes to create new audio spaces, or possible landscapes. The sound works present themselves with an aesthetic Roden has described as lower case – sound concerned with subtlety and the quiet activity of listening.
_
Mastering by Giuseppe Ielasi.
Cut by Fred Alstadt at Studio Angström