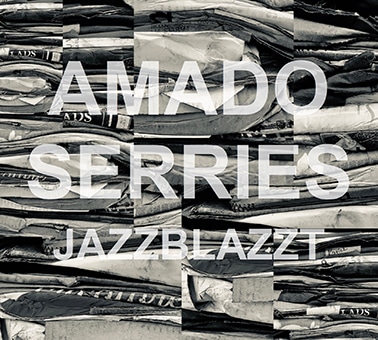 Rodrigo Amado was born in Lisbon, Portugal, in 1964 and took up the saxophone at the age of 17 while convalescing from an accident. Later he studied at the Hot Club Music School and was soon playing with numerous rock, pop and experimental projects. At the shifting boundary between free jazz and improvised music, Amado’s position is clear: he plays jazz. He is so clearly a jazz musician that he doesn’t require any pre-determined elements of rhythm, harmony, chorus lengths or melody to play jazz. There’s a rhythmic impetus, a bite in his sound, and it drives his lines forward, a fundamental impress on the world that tenor saxophonists like Archie Shepp, Coleman Hawkins or Sonny Rollins have been making for generations.Dirk Serries is a Belgian musician who started as an ambient composer and musician under the name of Vidna Obmana (releases also on Klanggalerie). In 2007 he gave up thsi pseudonym to concentrate on work under his own name and under the name Fear Falls Burning. The collaboration “Jazzblazzt” was recorded live in in concert on August 28th, 2018 at the venue “Jazzblazzt” in The Netherlands. Amado plays tenor saxophone, Serries electric and acoustic guitars. It was mixed and mastered by Dirk Serries. Originally released as a very limited cassette only, we are happy to now offer you a CD of this fantastic duo collaboration.