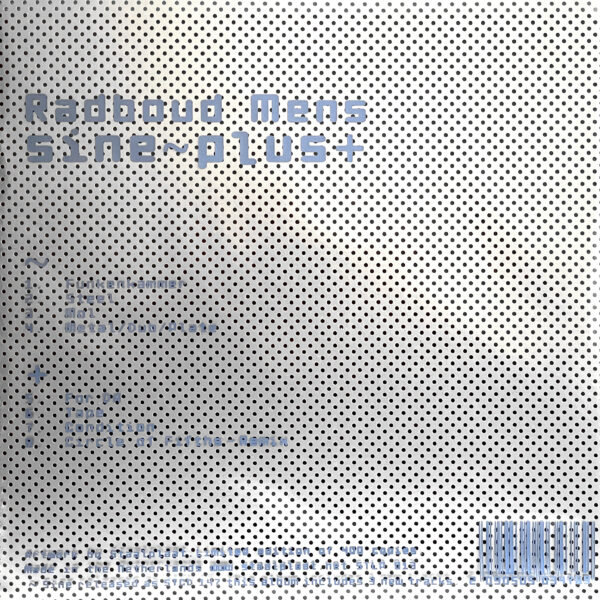 Sine is one of the earlier works by renowned sound-artist, composer and sound designer, Radboud Mens. It was constructed in 1998 and released on CD by Staalplaat in 2000 who now reissue this on vinyl in 2021, featuring an entire side of new material. Having forged out a unique path in music for many years this is a means by which to view the genesis of what would become “Radboud Mens music”.

Side A comprises the original Sine which is considered a minor masterpiece of the early 2000’s click dub electronica. Funkhummer launches proceedings by a measured gathering of elements, buzzes and hums traverse the rhythmic spikes that punctuate throughout. Already at this starting post one can acknowledge machine music with a human pulse. Machines lurch and growl gently amongst a tiny ping pong pulse on the next track Steel. Moi attaches itself to the subconscious with its dizzying sinewy highs and bare bones bass shadowing an equal love for dub processes and experimental forms. With Metal Dub Plate a dark drone anchors the mischievous random play on the surface. Equally unnerving and enticing here we see the end of the original Sine.

Flip the record and we enter the new chapter in the story of Sine. Radboud works on music that binds disparate forms together into one sound, as a result these new tracks incorporate all styles witnessed in the original, retaining the clicks and cuts mentality whilst incorporating a deeper ambient drone approach with a minimal dub influence sweeping throughout. For Da is a direct continuation of the original work with it’s light clicks and a woozy atmosphere. Tape shifts gears into a deep haunted world with a skittering beat and repeating melodic cloud of sound. Condition takes the experimental dub further into space leading into the uplifting conclusion where ascension takes hold.

The original and updated Sine fit firmly together as a unique whole bringing together a sparse assured sound carefully crafted to ignite a transcendental mood in the listener.