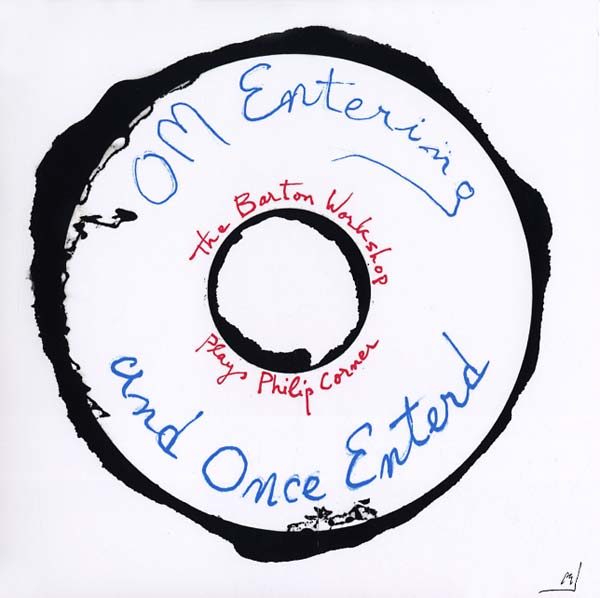 “OM Entering. and Once Enterd”

Kye is proud to announce the release of “OM Entering. and Once Enterd”, the latest LP from veteran fluxus composer Philip Corner. “OM Entering. and Once Enterd” comprises four previously unreleased recordings with the Barton Workshop, taken from performances in the Netherlands, and South Korea, between 2000-2007.
“Om Entrance” which one does…. because the performance is a real “passage from the material to the spiritual” unless the “real” world is just as spiritual already which i like to think it is. As perhaps an everyday awareness is already to be entranced which i have been told it is, really. To the facts: musicians’ coming-in already the performance of everything has to be done to get ready from unpacking to tuning and all that is done in the concentrated and exalted spirit of real music. Multiplicity moves noise to instrument possibilities with virtuosity show-offs slowing down to a perfect tuning in a quiet circle from where there is nowhere else to go but the sustaining of a quiet long tone.
My old friend and colleague also great composer Jim Fulkerson is there as he has be, as he was even at the first performance way back must be almost  50 years by now joining the Creative Associates at the University of Buffalo on his initiative as likewise these performances in Holland with his group he calls The Barton Workshop and for sure he is there playing trombone too.
The movement from Sang/Teh (Situations). Guard duty in a cold Korean winter. This piece was a major turning-point in my work.  My life too you-could-say. “Of Ancient Times and Modern Sounds” i wrote then: a better world—much much better—than being in the American Army. The heterophonic melody-only texture learned from their “Ah Ahk” court music (“Soo Je Chun” the most beautiful music in the history of the world!) imposed on a thoroughly modern chromatic note structure. Occidental instruments absorbing the traditions of subtle sound colours so-long absent from the West.
Public performance in Seoul. That must have been the Spring of 1961 just before they “shipped me out”, to bring all that back home.
Before that the wonderful and exceptional opportunity to “run through” some of it with the indigenous instruments of the Koog Ahk Wun (National Music Institute) thanks to the cultural open-mindedness of the classical kayageum master Byungki Hwang. And Jim has not only played the 3rd movement often, but brought if back to Korea once at the Pan Music Festival.  But my long-waiting-for performance in Korea on native instruments has yet to take place.
The Chopin Prelude piece is one of two, reworking passages from his D Major Prelude for piano, and a part of the “as a revelation” series which “looks into” moments from the classics which usually go by too fast.  Begun with Mozart, the series has “got a lot of mileage” out of Satie, as well as including Buxtehude, Bach, Rimsky-Korsakoff, Verdi, Ives, Berlioz, and others.” (Philip Corner, 2015)
“OM Entering. and Once Enterd” arrives in a full color, high gloss Philip Corner designed sleeve, with insert, 350 copies black vinyl.