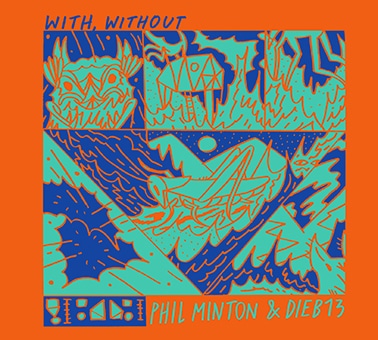 Phil Minton is a jazz/free-improvising vocalist and trumpeter. He is a highly dramatic baritone who tends to specialize in literary texts: he has sung lyrics by William Blake with Mike Westbrook’s group, Daniil Kharms and Joseph Brodsky with Simon Nabatov, and extracts from James Joyce’s Finnegans Wake with his own ensemble. Minton is perhaps best known, however, for his completely free-form work, which involves “extended techniques” that can be as unsettling as they can be mesmerising. His vocals often include the sounds of retching, burping, screaming, and gasping, as well as childlike muttering, whining, crying and humming; he also has an ability to distort his vocal cords to produce two notes at once. Dieter Kovačič aka Dieb13 is an Austrian improvisational musician who mostly works with turntables. Since the late 1980s he has been experimenting with cassette players, vinyl records, CDs and harddiscs. He has a duo with Billy Roisz which combines electronic music with experimental filmmaking. Their first collaborative album has been recorded live at various festivals, including Wels Unlimited, Disobedience Ljubljana or Instants Chavires, Montreuil.