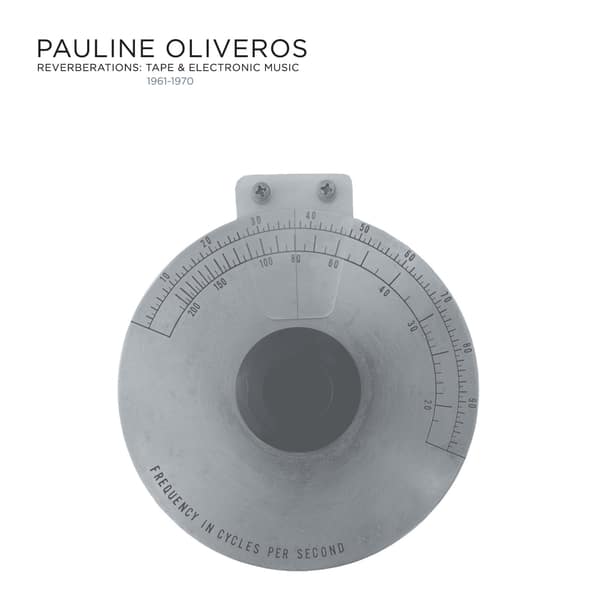 Reissue 2022, new version with 11 cds..
“Dense 11 disc collection of Pauline Oliveros’ early and unreleased electronic work including her very first piece for tape made in 1961. The majority of these pieces have never before been released.Organized chronologically by studio this set not only documents Pauline’s earliest electronic music but it also functions as an early history of electronic music itself. Extensive liner notes including essays from Pauline Oliveros, Alex Chechile, Ramon Sender, David Bernstein, Corey Arcangel and Benjamin Tinker. This box set is being released in conjunction with Pauline Oliveros’ 80th birthday celebrations. Pauline Oliveros, composer, performer and humanitarian is an important pioneer in American Music. Acclaimed internationally, for four decades she has explored sound — forging new ground for herself and others. Through improvisation, electronic music, ritual, teaching and meditation she has created a body of work with such breadth of vision that it profoundly effects those who experience it and eludes many who try to write about it. “On some level, music, sound consciousness and religion are all one, and she would seem to be very close to that level.” John Rockwell Oliveros has been honored with awards, grants and concerts internationally. Whether performing at the John F. Kennedy Center in Washington D.C., in an underground cavern, or in the studios of West German Radio, Oliveros’ commitment to interaction with the moment is unchanged. She can make the sound of a sweeping siren into another instrument of the ensemble.
Through Deep Listening Pieces and earlier Sonic Meditations Oliveros introduced the concept of incorporating all environmental sounds into musical performance. To make a pleasurable experience of this requires focused concentration, skilled musicianship and strong improvisational skills, which are the hallmarks of Oliveros’ form. In performance Oliveros uses an accordion which has been re-tuned in two different systems of her just intonation in addition to electronics to alter the sound of the accordion and to explore the individual characteristics of each room. (Tuning Chart)
Pauline Oliveros has built a loyal following through her concerts, recordings, publications and musical compositions that she has written for soloists and ensembles in music, dance, theater and interarts companies. She has also provided leadership within the music community from her early years as the first Director of the Center for Contemporary Music (formerly the Tape Music Center at Mills), director of the Center for Music Experiment during her 14 year tenure as professor of music at the University of California at San Diego to acting in an advisory capacity for organizations such as The National Endowment for the Arts, The New York State Council for the Arts, and many private foundations. She now serves as Distinguished Research Professor of Music at Rensselaer Polytechnic Institute and Darius Milhaud Composer in Residence at Mills College. Oliveros has been vocal about representing the needs of individual artists, about the need for diversity and experimentation in the arts, and promoting cooperation and good will among people.
“Time Perspectives”, “Mnemonics I”, “Mnemonics II”, “Mnemonics III”, “Mnemonics IV”, “Mnemonics V”, “II Of IV”, “III Of IV”, “IV Of IV”, “V Of IV”, “III”,
“Team & Desecrations Improvisation”, “The Day I Disconnected The Erase Head And Forgot To Reconnect It”, “Jar Piece”, “Another Big Mother”, “Fed Back 1”, “Fed Back 2”, “5000 Miles”, “Angel Fix”, “Bottoms Up 1”, “Nite”, “Ringing The Mods 1 Heads”, “Ringing The Mods 2 Tails”, “Three Pieces I”, “Three Pieces II”, “Three Pieces III”, “Big Slow Bog”, “Boone Bog”, “Bog Bog”, “Mind Bog”, “Mewsack”, “50-50 1 Heads”, “50=50 2 Tails”, “A Little Noise In The System”, “Red Horse Headache”.