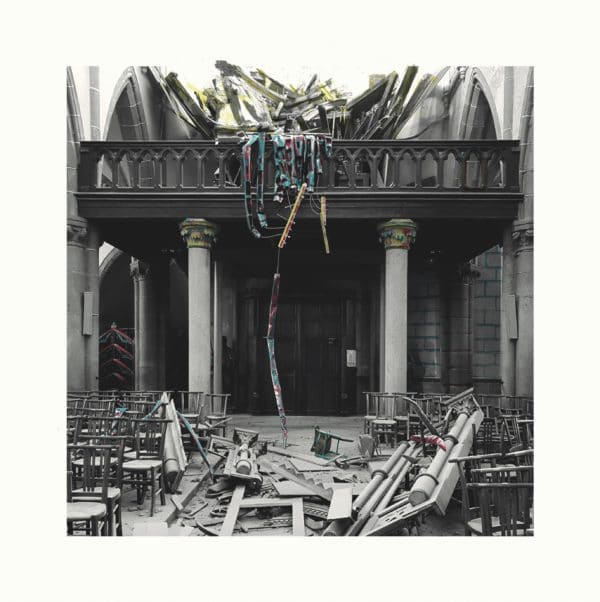 The approach of Pancrace is based on the physicality of sound, a choice of specific tone qualities within a given spatial contextual awareness. Therefore the manufacturing and usage of the musical instrument are constantly reassessed. Consequently, playing with the mechanical aspect of the instruments is central to their musical approach and narrative. Designing an unbound pipe organ – though emulating some of the mechanical idiomatics of the initial Pancrace church organ – seemed the obvious way to gain more spatial control over a vast choice of places. This allowed them to approach their music from a totally new angle and work from within the organ. The results of these experiments are captured here, on their second opus, Fluid Hammer.

“ During the 2017 OrgelFesl in Waldkirch, we discovered Wolfram Stuetzle’s workshop, he is a church organ maker. In his attic we discovered thousands of old pipes and other elements for organ making. It was here we had the idea we could one day have our own organ for Pancrace. Thanks to his help, we started to collect some parts in his attic. We also met another organ maker Stefan Freisen who gave us an old bellow which he used as a flower pot in his garden and I also bought some of his 80 year old electromagnets. In January 2018, we were all together in Marmoutier to discover the possibilities of MIDI controlled organs. A month later, the organ “ORGANOUS “ was built in my workshop.” – Léo Maurel

This new beast of an instrument, somewhere between a spider or an octopus, lead Pancrace to compose from the frontality of the instrument as well as with the interactive tone possibilities brought by other instruments. With its six panels display (two bass registers, two treble and a pair of crumhorns) the organ projects sound like the musique concrèt Acousmonium giving the listener a spatialised perception of a wide range of tones and harmonics. Unbounded, the pancrace people have achieved a whole new cosmos of sounds focusing on sources rather than reverberation. Here the ORGANOUS is both the process and the context.

Throughout the double albums 17 tracks one is exposed to a wide variety of Pancrace potential along with the sprinkled conversation with the makers of the water pumps, (reproduced in English inside the sleeve). At once playful, intriguing, surprising and warm this is an exceptional sonic experience from one of today’s most exceptional units.