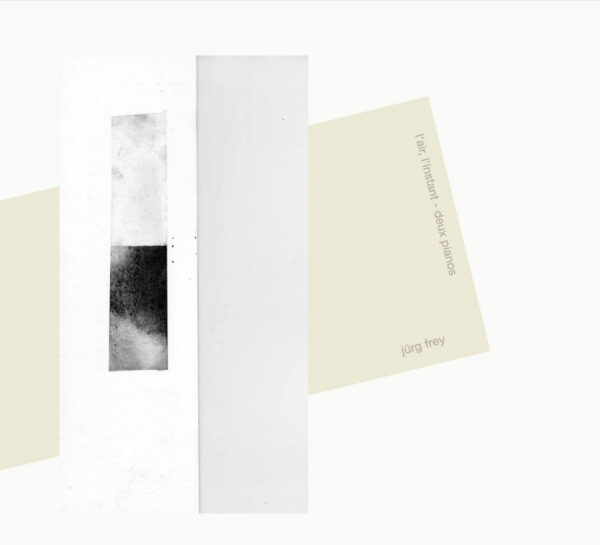 Jürg Frey’s unique compositional approach places him at the cutting edge of contemporary classical music. Since the late 90’s, Frey started to work with ‘lists’ as a basis of his compositions, sometimes words, sometimes chords, from which he developed and organized musical materials. In recent years, Frey’s focus on ‘lists’ has extended more toward the connections of items with each other, forming melodies.

Frey wrote two compositions for two pianos in 2017-2019: ‘Entre les deux l’instant’ (2017/2018) and ‘toucher l’air’ (deux pianos) (2019). ‘Entre les deux l’instant’ was world-premiered by Dutch pianists Reinier van Houdt and Dante Boon at Splendor Amsterdam and was later recorded there together with ‘toucher l’air’ by the same two pianists in the presence of Frey in Amsterdam in 2019.

The first piece on this album,’toucher l’air (deux pianos)’, was composed in close connection to Frey’s previous composition ‘Entre les deux l’instant’. This piece consists of seven movements, written for two parts for piano 1 and piano 2, in which two pianists play each part at the same time with subtle similarities but in different tempos. The interaction between the two is only vaguely shown in the score, giving this piece a mixed sense of openness and closeness, separation (or aloneness) and intimacy.

The second piece on this album, ‘Entre les deux l’instant’, consists of two parts: ‘Melody’ and ‘List of Sounds’. Melody starts with pianist 1 (Van Houdt), then continues with pianist 2 (Boon), going back and forth between two pianists to the end. When one pianist plays Melody, the other plays a note(s) from List of Sounds given in order in the score. The pianist can also add extra notes to the Melody, to double these notes, but slightly later and softer than the sounds of Melody, like adding a slightly ‘off’ shade to it. Two parts are played simultaneously by two pianists but the timings are flexible, up to each pianist to decide, not pre-arranged nor intended to coincide precisely.