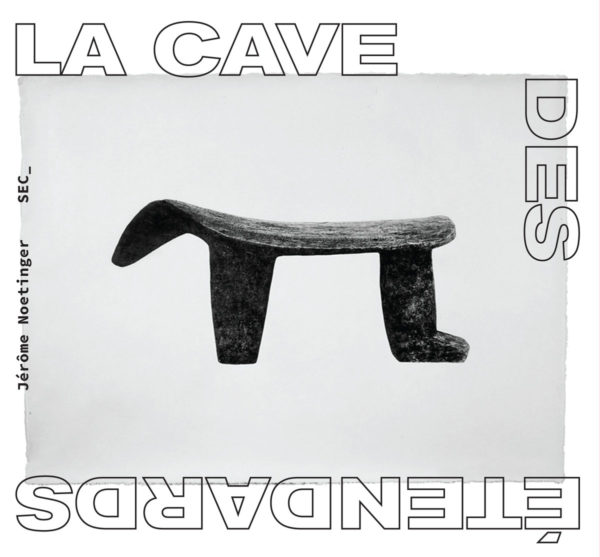 Jérôme Noetinger revox reel-to-reel recorder, electro-acoustic devices. SEC_ revox reel-to-reel recorder, feedback system, laptop.“La Cave Des Étendards” or “The Cave Of Standards” is a wordplay between Cave12 and Standards, two venues where they recorded the concerts which became the foundation for the tracks of the album. “L’orecchio Di Dionigi” is a cave in Siracusa with a special echo that allows to hear from the entrance any sound from the inside; in the past it was probably used as a prison because of its aural properties, very useful to control what the prisoners said. “Le chateau Est Une Oreille” is inspired by Italo Calvino’s text “Un Re In Ascolto”, written for Lucian Berio, where he describes sound narrative of a castle from the position of a paranoid king. You can use these references as a way to enter the cinematic world both musicians created with multiplicity of tape sampling and the use of extra tools to make the music as complex and inter-refential as possible.Jérôme Noetinger founded Cellule d’Intervention Metamkine in 1987, with French cinematographer and performer Christophe Auger and Xavier Quérel. They have performed with Nachtluft, Voice Crack, Tom Cora, Keith Rowe… He has collaborated with longtime partner Lionel Marchetti since 1993 and is a member of avant-improv orchestra MIMEO. He founded and runs the record label and distributor Metamkine (curating its “Cinéma Pour L’Oreille” collection). He mostly plays the tape recorder Revox B77. This is his second album on Mikroton following “Disturbio” with Angélica Castelló.SEC_ is the moniker of Mimmo Napolitano, electronic musician and composer from Naples, Italy. With his tape recorder Revox, that he uses in a very physical and unconventional way, SEC_ has brought new nourishment to the Italian experimental panorama, pushing the musique concrete and the acousmatic sound outside the academic boundries, mixing them with more spontaneous musical practices (power electronics, no-input feedback, electroacoustic improvisation). He plays in solo or in collaboration with Aspec(t), Jérôme Noetinger, Andy Guhl, Dave Phillips, Valerio Tricoli, Olivier Di Placido, Ken Vandermark, Dario Sanfilippo.300 copies.