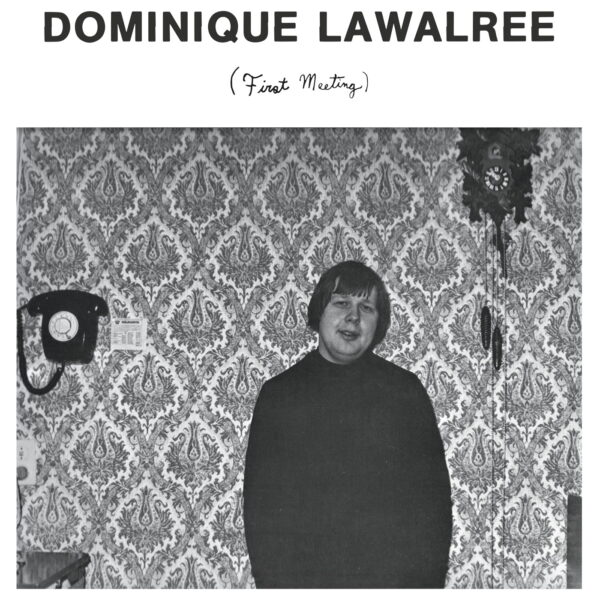 Finally issued on vinyl again, the impossibly gentle, sad, life-affirming ‘First Meeting’ is a record we’ve described as one of the loveliest chance-encounters we’ve ever had with music, and by all measures one of our favourite albums of all time. If you’re into anything from Erik Satie to Virginia Astley, Brian Eno’s short-lived Obscure label to Laila Sakini, or if you like the idea of timeless outsider music for piano, wurlitzer, bells, flute and voice, this precious selection of intimate wonders is ready and waiting for you to melt into. It might just change your life too.
‘First Meeting’ is an indispensable introduction to the wonderfully moving and expressive parlour music of Dominique Lawalrée – a singular figure who sadly passed away in 2019. Lawalrée had been recording music since 1976, almost appeared on Brian Eno’s Obscure label and counted Gavin Bryars a long time friend and fan of his music. It took until the first edition of this set compiled by Adrian Rew in 2017, however, for us to first encounter his work. Drawn from self-released material recorded between 1978-1982 on his own Brussels-based Editions Walrus (what a name?!), First Meeting reveals a quietly sublime and intimately idiosyncratic sound in 9 parts (15 on the expanded download version) – so quiet and intimate in fact that we feel like a privileged fly on the high ceiling of his apartment studio, twitching our antenna whilst he strokes his keys and synths into almost indescribably beautiful tapestries.
In the enlightening liner notes by Britton Powell, Lawalree’s music is perfectly described as “wallpaper; ornate and repetitive” when compared with the music of Satie and Eno, with whom he clearly shares an affinity for subtle and meditative musicality, but the distinction lies in the inherent surreality of his music and its ability to entice and encourage closer listening. Lawalrée is kind and generous with memorable melodies too, but layers his recordings with incidental room sounds and touches of more exotic, Eastern influence that reveal themselves with each new listen, perhaps even more so now thanks to Rashad Becker’s exquisite remastering, which sound like he’s removed a veil of cobwebs we didn’t even realise was there in the first place.
There’s a beautiful nuance of consonance to Lawalrée’s music that tantalises the ear with its warbling harmonic complexity and elegant pacing, yet it’s never challenging; conveyed with an honesty that points to his equal appreciation of Satie, Feldman and Stockhausen as much as The Beatles or Led Zeppelin, the latter of whom Lawalrée analysed for a book of second-by-second analysis, culminating in a meeting with The Beatles’ engineer, Geoff Emerick, to whom he pointed out mistakes in the classic recordings which nobody else has ever noticed.