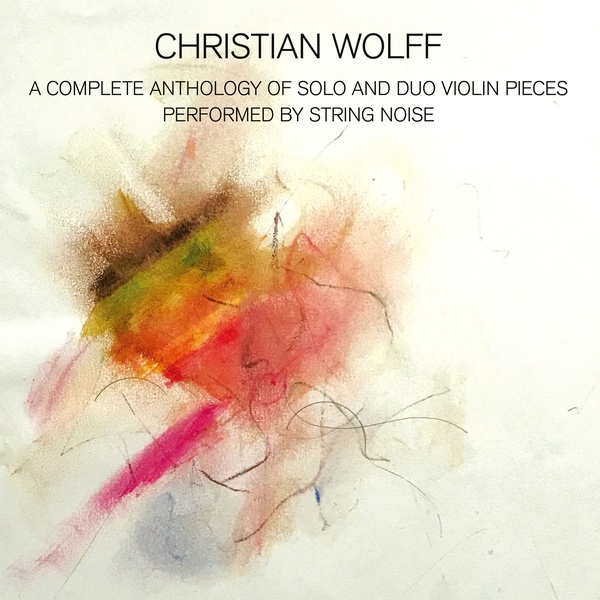 "A complete anthology of solo and duo violin pieces"

Black Truffle is pleased to announce its second release from New York violin duo String Noise (Conrad Harris and Pauline Kim Harris), following on from their self-titled double-disc collection of compositions by Alvin Lucier (BT061). Here they present A Complete Anthology of Solo and Duo Violin Pieces by legendary American experimental composer Christian Wolff. The youngest and in some ways most radical of the composers of the New York School (alongside Brown, Cage, and Feldman), Wolff has ceaselessly rethought his approach throughout the seven decades of his composing career, moving from early experiments in radical reduction through indeterminacy, improvisation, and leftist political engagement to reach the limpid lyrical fragments of his most recent music.

Beautifully recorded across two days by Ryan Streber with Wolff in attendance, String Duo’s complete anthology of Wolff’s work for violin solo and duo covers the entirety of the composer’s career, from his earliest published work to a major new work written for this recording (presented in a tasteful non-chronological sequence). Written by the teenaged Wolff in 1950 during his brief period studying with Cage, Duo for Violins is a beautifully austere experiment in extreme reduction, using only three chromatically adjacent pitches without octave transpositions. Exploring the possible permutations of the limited material passing slowly between the two violins, the work prefigures the incessant worrying at small intervals of late Feldman works such as For Philip Guston or—fittingly—For Christian Wolff. This recording also presents premiere recordings of two other short duo pieces from the same year, recently rediscovered by Wolff in his papers, which use similarly reduced materials in a livelier, more dynamic manner.

Moving forward to the 1970s, the solo pieces Bread and Roses and The Death of Mother Jones belong to the period in which Wolff was drawing on political music, in this case two early 20th century songs that celebrate women labour activists. In both, arrangements of the traditional melodies are followed by a series of technically demanding free variations in a modernist style. The lyricism of these pieces is carried into the more fragmented, elusive works of the 90s onward. In the beautiful Six Melodies Variation (1993), written in tribute to Cage, fragments of Cage’s Six Melodies dissolve into anthemic snatches of the music of 18th century American composer William Billings (whose music Cage used in Apartment House 1776 and other works). The sixteen Small Duos for Violinists (2021) explore the radically disjunctive style of recent major Wolff works such as Long Piano (Peace March 11), where short ‘patches’ varying in style, density, and notation system are places next to each other without clear concern for conventional compositional principles. Here the individual duos range in length from a few seconds to just under two minutes, in energy from near stillness to churning rhythm, and in harmonic content from crystalline consonance to thorny dissonance. Including pieces inspired by the work of Rameau and Satie, like much of Wolff’s later music, the Small Duos manage to be at once lyrically immediate and subtly challenging: as Philip Thomas has written, ‘Our ears are not used to such a sustained rate of change’.

Published in a stylish digipak including extensive liner notes and wonderful reproductions of a series of Wolff’s delicate abstract works in pencil, crayon, and water colour, A Complete Anthology of Solo and Duo Violin Pieces is both an important addition to the documentation of Wolff’s oeuvre and an accessible survey of the many facets of his innovative music.