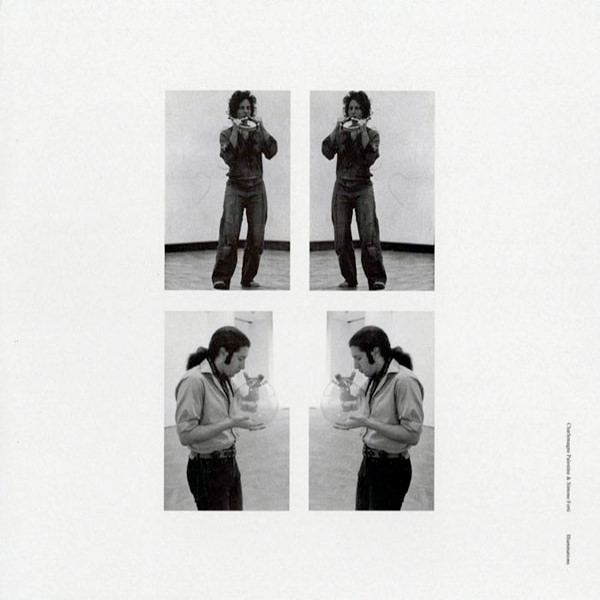 Alga Marghen proudly presents the first ever release of “Illuminations”, or Charlemagne Palestine and Simone Forti duo interactions, illuminated with dim red lights. In early 1970 Mort Subotnick asked Charlemagne Palestine to join his soon to be created Media Department at the new ‘Dream School of the Future’ endowed by the Disneys to be called the California Institute of the Arts.

Charlemagne and Simone Forti met there in 1970, when La Monte Young asked them to arrange a California concert for Pandit Pran Nath. They decided to try an improvisation session together and Charlemagne invited Simone the first time to the electronic music studio where he worked regularly. Their medium blended as a play of interacting sound waves and solid matter in motion as Charlemagne and Simone shared energy and focus.

The three previously unreleased recordings on this LP were made between October and December 1971. The first take, titled ‘Illumination,’ is for two voices moving in the space with small bells and crystal glasses while Simone Forti plays the molimo, a corrugated tube meant for connecting the gas stove. The second take titled, ‘Wed Oct 13th 1971,’ has Simone and Charlemagne in a song dialogue as animals do. It was also at Cal Arts that Charlemagne Palestine first encountered a Bosendorfer Imperial Piano of Vienna. He played it often as Simone danced during their ‘Illuminations’. Take three is a song sang in falsetto while playing the Bosendorfer Imperial in an arpeggiated style that predates the ‘strummings’. Listening to these ‘three takes’ 40 years later, they ooze a timeless, carefree mystical, magical, dreamy atmosphere that evoked the times of the late 60s to early 70s in Charlemagne and Simone part of the California Art Scene. ‘Illuminations’ were a unique open spontaneous form of performance, ritual and prayer.

Edition limited to 365 copies with an essay by both Charlemagne Palestine and Simone Forti, as well as photos of the performances reproduced on the LP front sleeve.