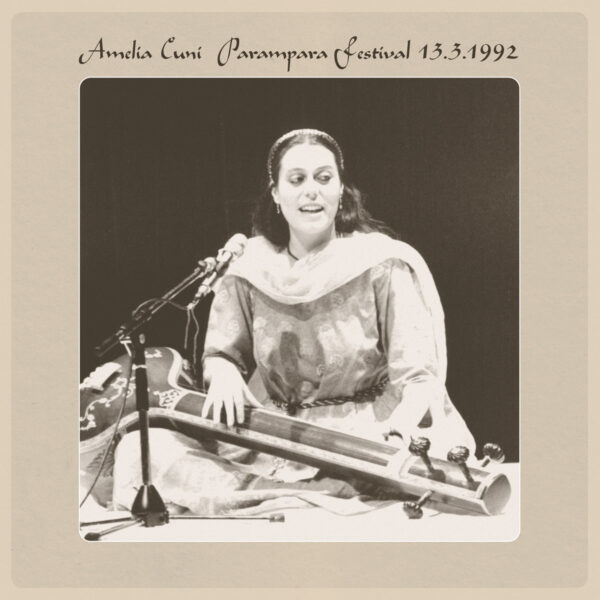 Black Truffle is pleased to announce Parampara Festival 13.3.1992, a stunning performance by Amelia Cuni captured live in Berlin almost thirty years ago. Milanese by birth and resident in Berlin for many years, Cuni lived in India for over a decade, studying the classical vocal style of dhrupad under masters of the form. Though perhaps known to many listeners primarily through her performances of the vocal music of John Cage and collaborations with Werner Durand and Terry Riley, she is recognised internationally as one of the great contemporary proponents of traditional dhrupad singing. These recordings document her performance at the 1992 Parampara Festival at the Haus der Kulturen der Welt, a landmark event celebrating the global spread of Indian classical music, bringing together Indian teachers with their international students.

Accompanied by Gianni Ricchizzi on vichitra vina (a plucked zither played with a glass ball slide) and her own tanpura, Cuni stretches out for a languorous side-long performance of the late night Raag Bageshri, the limpid tones of her vocal improvisations illuminating the droning strings like flashes of the moon revealed by rushing clouds. Initially working patiently through a series of subtle dialogues between Cuni’s melodic extemporisations and phrases in response from Richizzi’s vichitra vina, the performance builds to a series of strikingly beautiful, virtuosic held notes from Cuni at the beginning of its second half, before picking up some brisker rhythmic articulation on the way to its conclusion.

On Devino Amor, Cuni presents her own composition, a setting of mystical texts by the 13th century Franciscan friar Jacopone da Todi, elaborated through various traditional raags. Like the words used for most dhrupad compositions, the text Cuni has selected from da Todi praises divine love, thus linking her otherwise unorthodox use of Italian text to the dhrupad tradition. The result is a performance of a yearning intensity that communicates across any language barrier. On the final performance, Cuni and Ricchizzi are joined by Helmut Waibl on the two-headed pakhawaj drum for a piece using a 14 beat rhythmic pattern that sets in motion a cycle of tension and release, metrical dissolution and resolution, possessing a subtle grandeur.

Illustrated with archival images of the performance and accompanied by new liner notes from Peter Pannke and Lars-Christian Koch, Parampara Festival 13.3.1992 invites listeners to lose themselves in Amelia Cuni’s unique approach to ancient tradition.