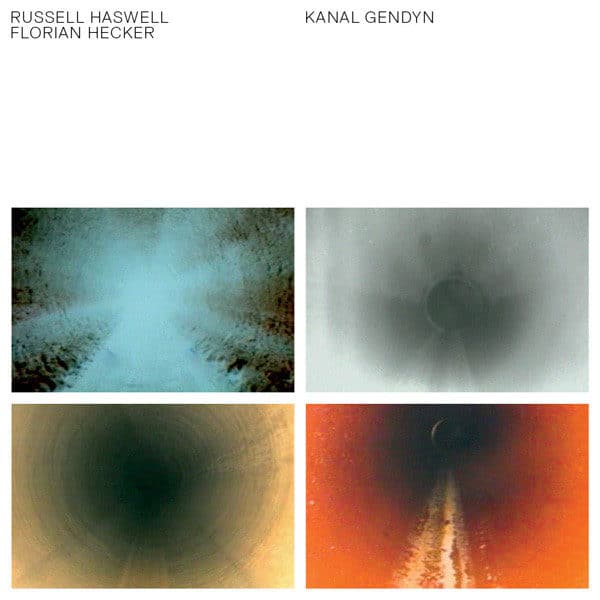 “Editions Mego is happy to announce the release of “Kanal Gendyn”, a Vinyl and DVD set by Russell Haswell & Florian Hecker. This is the first full length release by the artists following their highly acclaimed albums, ’Blackest Ever Black (Electroacoustic UPIC Recordings)’ (Warner Classics, 2007), and ’UPIC Warp Tracks’ (Warp, 2008), in addition to their remix’s of Popol Vuh, and Voice Crack. In the late 90s, early 2000s, it became common for bands, or solo artists to perform live – often alternative – soundtracks to feature films or silent classics. Critical of obvious instrumentation and the combination with known classic film, the artists Russell Haswell & Florian Hecker chose to create a real-time soundtrack, to an unscored film, ’Kanal Video’ (1992, 60 min) by the Swiss artist duo Peter Fischli & David Weiss. Core to Kanal Gendyn is Haswell & Hecker’s ongoing research on the legacies of polymath Iannis Xenakis (1922-2001) and in particular his concept of the Dynamic Stochastic Synthesis, an abstract sound synthesis procedure that creates ‘sound out of nothing’. In an interview with Peter Hoffmann, the artists recall: “This video, which consists of an hour long ‘ride’ through the Zurich sewage system, with a remotely controlled maintenance vehicle equipped with a video camera to survey the sewers for eventual irregularities of defects – struck us both as an ideal piece to be projected in a ‘nightclub’ or music venue with a Gendyn only performance. We found twisted relations with such an hour long ‘tunnel vision’. Once with the seemingly endless amount of computer generated video projections used as visuals accompanying raves and techno parties during the 1990’s – and also to the accounts of visual hallucinations induced by Mescaline as described by Heinrich Klüver in the 1920’s – with the so called ‘form constants’ – where he mentions amongst others, ‘tunnel like’ patterns. The particularities of Gendyn, with its ever changing and meandering waveforms appeared to us as an ideal counterpart.” Kanal Gendyn was performed on the occasion of the event ‘Musterraum 9. Dual Presentation – Peter Fischli & David Weiss – Russell Haswell & Florian Hecker’ at Musterraum, Munich, 30.01.2004. Originally constructed as an experimental building, ‘Musterraum’ – German for sample or reference room – was a freestanding cube with a base area of 10 12 meters. Built as a test and reference space for the planning and construction of the adjacent Pinakothek der Moderne. Two stereo feeds were crossed for quadraphonic (4.0) diffusion using a L&B F12 / B12 loudspeaker system. Performed concurrently to the Peter Fischli & David Weiss, ‘Kanal Video’ (1992, 60 min.) screened on three facing walls. Kanal Gendyn is released as stereo vinyl LP + 4.0 DTS 24 Bit / 48 KHz DVD (audio only) set. The cover features 10 stills from the original Fischli & Weiss video, included inside is a 30 x 30 cm 170 gramm paper insert with a further, full-page still, plus extensive sleeve notes by musicologist and software developer Peter Hoffmann, and everything was designed by NORM, Zurich. Its also worth noting that, with a running time of over a hour, this is one of the longest single LP releases you will come across ! Cut by Rashad ’the Master’ Becker at Dubplates & Mastering, Berlin, September 2011.”