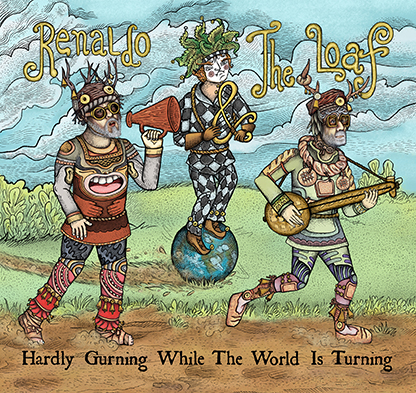 "Hardly Gurning While The World Is Turning"

Renaldo and the Loaf is an English musical duo active since the late 1970s, consisting of a pathologist (David Janssen or Ted the Loaf) and an architect (Brian Poole or Renaldo Malpractice). By their own assertion, they achieved their unique sound in part by striving to get unnatural synthesizer-like sounds using only what instruments they had available (acoustic ones). To that end they routinely used muffled and de-tuned instruments, and, often to striking effect, tape loops and manipulation.
In 2018 they played their first ever live show at Klang 25 in Vienna, documented on the album Long Time Coming. In 2016 the group recorded a brand new album entitled Gurdy Hurding. When it was released on vinyl in 2019, it came with a fourth side of a new piece, Hardly Gurning While The World Is Turning. This has never been available on CD – until now.
Here’s what the band says: “Hardly Gurning itself is part remix, part new recording, part re-imagining…to complement this we decided to ask some of our friends if they might create a remix/re-imagination of the Gurdy Hurding tracks. In a strange way, the lockdowns of 2020 have benefitted this project as, in most cases, it afforded our contributors some time to work on it, which otherwise they may not have able to. We’ve certainly been excited by what has emerged – almost the whole of Gurdy Hurding has been revisited.”