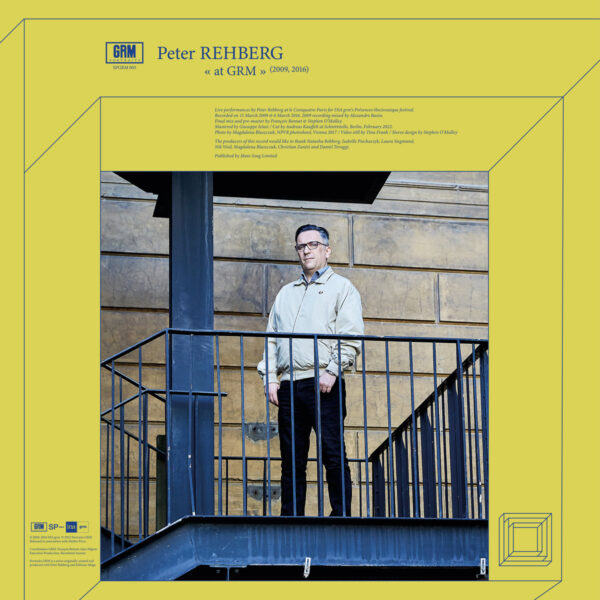 Shelter Press and Ina grm are pleased and moved to present two previously unreleased recordings of Peter Rehberg, two live performances given at the GRM which, each in their own way, vividly illustrate the extent of his sonic palette.

On 22 July 2021, Peter Rehberg passed away, leaving a great emptiness in his wake. Many initiatives have already celebrated or will soon celebrate his memory and the titanic work he put at the service of so many artists – a whole musical community, in fact – through Editions Mego. INA grm, Shelter Press and Stephen O’Malley, who are continuing some of the collaborative Editions Mego sub-labels (Recollection GRM, Portraits GRM and Ideologic Organ), wanted to pay tribute more specifically to the musician Peter Rehberg, and to his immense talent.

Peter Rehberg, as an artist, has collaborated with the GRM on numerous occasions, both with Stephen O’Malley (as KTL) and solo. This release features two concerts given for the GRM, each time as part of the Présences électronique festival. The first concert, given on 15 March 2009 at the Maison de la Radio in Paris, marked the first collaboration between Peter Rehberg and the GRM and the beginning of a long and fruitful friendship. The second concert took place on 6 March 2016. Between these two concerts, 7 years have passed, 7 years in which the ties between Peter Rehberg and the GRM have been strengthened, 7 years in which Peter Rehberg’s music has flourished. What is striking in these two concerts is how Peter Rehberg’s unique musical sensitivity and ‘grammar’ can be heard beyond the instruments. For while the first concert is pure laptop music, the second is extended to the field of modular synthesis. However, in both concerts, the elements that are so personal to Peter Rehberg’s music are present and combine in a layering of sonic abrasions, raw sensations and a sensitivity that is as much about formal awareness as it is about the invocation of overwhelming emotions, even though a little hidden behind a radicality that is always a bit provocative. Peter Rehberg offers us a “portrait music”, a music that gives some clues about the personality of its author and whose absence continues to deepen an inconsolable sadness.