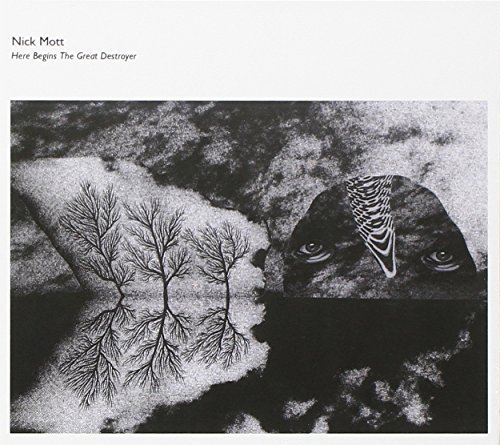 Discount price !
Nick Mott, previously known mostly for his work in and as a founding member of the eclectic group, Volcano The Bear, has since his departure been forging a path very much his own as, largely, a solo artist.
A couple of other projects aside, namely Skeleton Birds & the Number of God and Spectral Armies, his work under his own name commenced in 2011 via a one-sided 7”/art package also released on Lumberton Trading Company. Limited to 100 copies and featuring a print of his own incredible and unique fine art, this sold out very quickly and set the course for a second edition and, indeed, in 2012, an LP, The Visitors, on Alt Vinyl.
Similar to his drawings or art experiments with photocopied collages, his music beams in from some kind of distorted or fractured reality more focussed on those murkier twilight places the likes of H.P. Lovecraft cast their imaginations into. As the ten pieces on Here Begins the Great Destroyer pay witness to, a world of unfolding electronic textures, uneasy tones, rhythmic bursts and general sense of things not being quite as they seem serve as Nick’s main preoccupations. However, this is no daft ‘dark ambient’ muck. Rather, like certain other artists on LTCo, it uncomfortably resides in a space where the likes of Ranaldo & the Loaf, Tuxedo Moon, Nurse With Wound and Andrew Liles each all crawled from. A space, essentially, few others would dare, or wish, to venture to in the first instance. Of course, there is a crooked humour evident, too, as no artist can truly traverse such places without it. Well, at least not if they want to keep their sanity more or less functioning…
Here Begins the Great Destroyer is the first step towards what will, in due course, become a deluxe box set also containing an art booklet and vinyl by Nick Mott. The idea being that this release will not only promote it but can be added to the box set once ready by those interested in ordering it. More info is on the website.
In the meantime, this album exists in its own right via this digipak CD, which is limited to 300 and will not be reprinted.
Mastered, as often the case for a LTCo release, by Sion Orgon (known equally as a solo artist and working affiliate of Thighpaulsandra and the now unfortunately and tragically defunct Coil, amongst others), Here Begins the Great Destroyer is an album for those amongst us who command a more challenging listening experience.