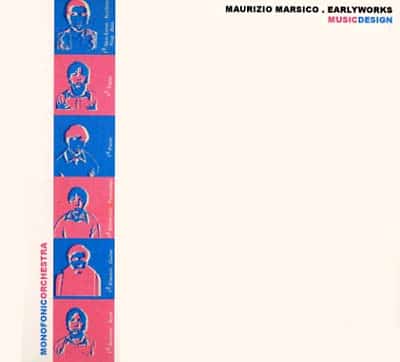 “Monofonicorchestra is not a disc recorded in mono / is not ambient music / is not funky / is not experimental music / is not funny / Monofonicorchestra is not avant-garde / is not pop / is not op / is not dada / Monofonicorchestra is not fashion / is not hard-core / is not horror / is not Frigidaire was writing Maurizio Marsico at 10h20 on wednesday, december 23rd, 1981. A country: Italy. Several countries: Italies. Late seventies, early eighties. The ether of punk is in everyone’s nose and disco virus invades even the most reticent legs. New-wave for sure rules the underground. Neo dandyism attitude applied to the italian post-rock era; Dolce Vita with a dreamed revolution in the background. United Countries of Italy! Bologna and the Confusional Quartet, Gaznevada, The Stupid Set. Not to forget the Naif Orchestra from Florence and all trans-borders adventurous navigators such as Piermario Ciani, Vittore Baroni (Lieutenant Murnau, Trax), the members of the musical theatre Magazzini Criminali. The vivid eclecticism of the above mentioned is to be compared to the aesthetic manifesto of the AtaTak crew from Düsseldorf (Der Plan, DAF, Tödliche Doris, Pyrolator). or the Vanity label japanese explorers (Tolerance, Aunt Sally, Normal Brain, BGM, RNA Organism). These bands were not leading the italo disco movement neither were they really punk or industrial nor waving cold-wave banners. First pressing limited to 500 copies with full color digipack sleeve. Also including a 12 page full color booklet with original graphics, photos as well as liner notes by Samon Takahashi.”