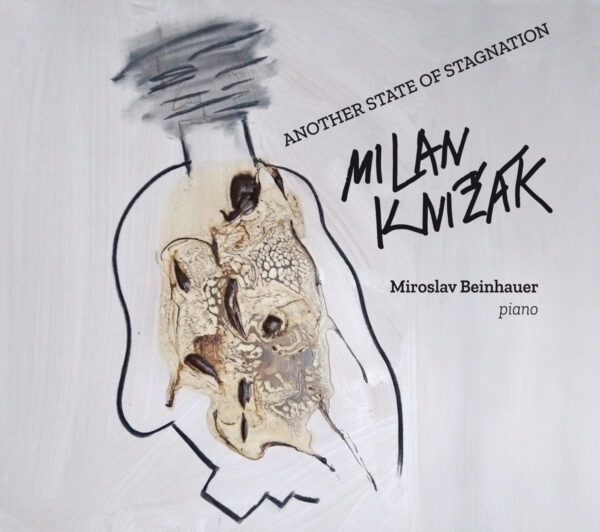 My piano compositions are a mixture of musical reminiscences and a confession of my love for disharmonic chords on the one hand, and lascivious melodies on the other. As in the case of almost all my pieces, I wrote them “dry”, at a desk, without using any musical instruments. I only worked with memory and a little bit of imagination. The compositions often come across as randomly taken out of a pot, which contains a blend of fragments of works of a variety of periods, styles and creators. (Milan Knízák, Mongrelised Piano)

Another State of Stagnation contains six unreleased piano pieces by Milan Knízák, written between 1991 and 2021. Played by Czech piano virtuoso Miroslav Beinhauer in August 2020 and recorded in August 2021 at Czech Radio Ostrava under the Petr Bakla’s recording direction. The author of the title and cover is Milan Knízák. Produced by re-set production.
In the second movement, at least two references to Czech “tramping” (hiking, country) music can be read or heard: Ceka huãí and Táboráku, plápolej. They are among the numerous references to other pieces, while they can concurrently be something else – for instance, a Beethoven minuet. Beinhauer pointed out: “Milan KníÏák’s piano works abound in these ‘quotations’, some of which are just very similar to well-known melodies, while others are true quotations, I do not even recognise some of them at first listen, but that is not actually the point. If someone does identify these quoted fragments when listening, they can feel good about themselves or can even remember the whole piece better, but I myself do not deem it essential in the case of Milan’s compositions. Alternation of styles is more important.”
(Boris Klepal, Score and Performance – Milan Knízák: Tramp Sonate or Looking for Context)

Prof. Milan Knízák, Dr.A.
Multimedia artist working in fine art (actions, paintings, sculptures), music, literature, architecture, fashion and furniture design. Member of the international art group FLUXUS. Featured in majorgalleries around the world as well as archives, catalogues, encyclopaedias and dictionaries. His BROKEN MUSIC (SRV400 LP) was included among the 1000 most important compositions of the 20th century. One of the 500 artists in the 20th Century Art Book (Phaidon Press, London and New York). A dictionary of designers published by Ambiente lists him as “a central figure in modern Czech design”. Curatorial work, theoretical essays, exhibition architecture. Extensive teaching, lecturing and publishing activities. Collector and expert on the history of puppet theatre (puppets, set design) and author of the only encyclopaedia of Czech and Slovak puppet theatre designers.
Under the communist regime he was arrested, searched and detained by the police approximately 300 times, spending several months in custody in total. He was convicted of failing to prevent a friend from deserting and of harming Czechoslovakia’s interests abroad, and in 1968 he was arrested in Vienna for attacking two policemen. From 1966 onwards he was listed as an enemy of the state. His final prohibited exhibition was to have been held in November 1989.
Milan Knízák has had more than 120 solo exhibitions and hundreds of group exhibitions throughout almost the entire world. He has published approximately 80 books and catalogues and released many music recordings, as well as creating a number of design projects.