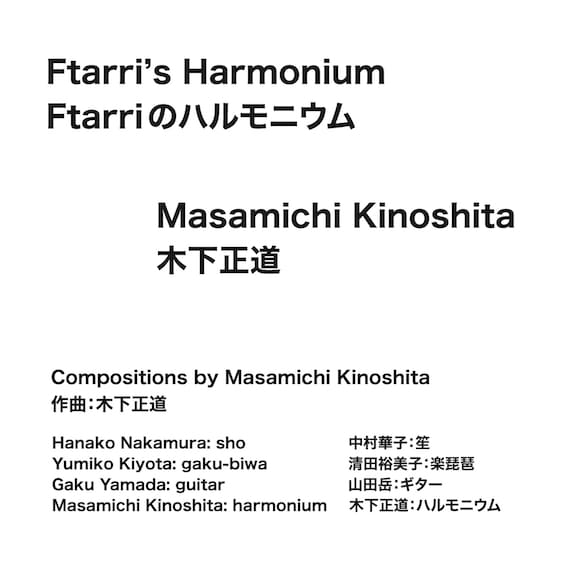 Why is there a harmonium (reed organ) at Ftarri? It all goes back to the Ftarri Festival held in Tokyo in November 2019. A quartet made up of Klaus Lang (harmonium), Johnny Chang (violin), Samuel Dunscombe (bass clarinet) and Michiko Ogawa (clarinet) was planned for the festival’s final day, so Ogawa quickly purchased a used harmonium for Lang. As she lives in Berlin, Ogawa and Ftarri decided that the harmonium would be housed there temporarily and used in Ftarri concerts.

Composer Masamichi Kinoshita, who often performs at Ftarri, was interested in holding concerts featuring the harmonium. He planned the series “Ftarri’s Harmonium,” the first concert of which took place in February 2020. The second concert, on March 14, was performed by Kinoshita and three other musicians, and it was decided that three pieces composed for the concert by Kinoshita would be released on an album. Composer Masamichi Kinoshita was born in Fukui Prefecture in 1969. He has long been known for his diverse and fascinating musical activities–in addition to composing many pieces each year, with a particular focus on chamber music, he plans concerts and performs improvisation using junk electronics.

For the second concert of the “Ftarri’s Harmonium” series, Kinoshita invited three energetic musicians active in the fields of gagaku (traditional Japanese court music) and contemporary music–Hanako Nakamura (sho), Yumiko Kiyota (gaku-biwa) and Gaku Yamada (guitar)–and Kinoshita himself played the harmonium. This CD is made up of three pieces composed by Kinoshita and performed by all four musicians–“47/19=2 . 9/19” (19 minutes), “Count to 11!” (8 minutes), and “17 Melodies, 13 Sustained Sounds, 1 Silence” (22 minutes). Through the combination of Japanese/western stringed instruments with Japanese/western instruments producing sustained tones, compositional structures highlighting the special qualities of the harmonium and other instruments–as well as the musicians’ superb performances–can be savored to the fullest in this endlessly fascinating album.
All compositions by Masamichi Kinoshita