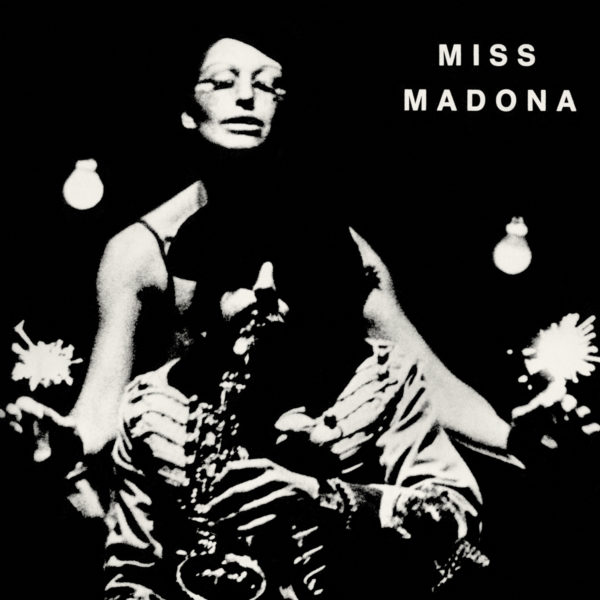 Two years after having recorded Aurora, which Gérard Terronès released on his Futura Records label in 1971, the Théâtre du Chêne Noir put on another show, Miss Madona, first at Avignon, and then at Ariane Mnouchkine’s Théâtre du Soleil. From this play, Gérard Gelas’ group took three sound extracts which they made, with no further ado, into a single.
Miss Madona is thus the second recording by Théâtre du Chêne Noir. The two sides (and three tracks) offer up an unbelievable instrumental theatre with something of a white magic ritual about it. The actors, so much better for the record, were also musicians; alongside Miss Madona, ex-star of the circus and now idol, were the piano and electric organ of Daniel Dublet, the saxophones of Pierre Surtel and Jean-Louis Canaud, and the trumpet of Gilbert Say.
But there are also the vocals of Beatrice Le Thierry, Bénédicte Maulet, Jean Paul Chazalon, Monik Lamy, Nicole Aubiat… which added to the mystery of what happened on stage. The sound of this particular theatre may remind us as much of John Coltrane as of Ravi Shankar, Pierre Henry or the Art Ensemble of Chicago. There are voices from beyond the grave, inspirational for future musicians: Steven Stapleton, for example who included Théâtre du Chêne Noir in his Nurse With Wound List.
On the occasion of Record Store Day 2020, Souffle Continu, who are just to reissue Aurora, can be proud of re-releasing this single, which is rare in more ways than one
First ever vinyl reissue
Remastered from the master tapes
Licensed from Le Théâtre du Chêne Noir