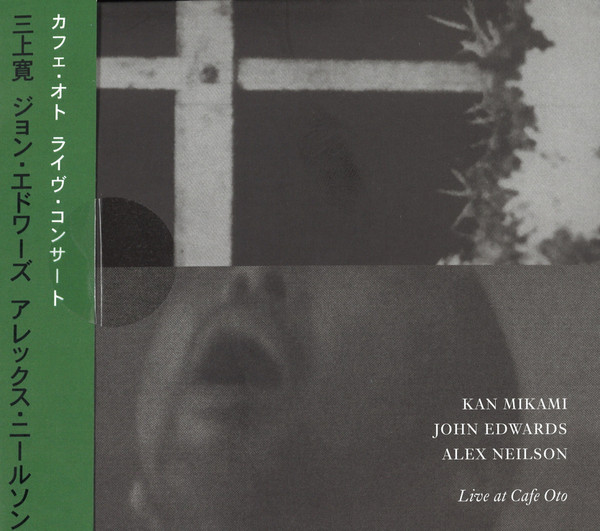 Japanese bluesman Kan Mikami is nothing less than an unalloyed force of nature. A skin-shredding blast of frozen wind from the poor, rural north of Japan that he calls home. In the late 1960s, like thousands of other Japanese young people Mikami made his way to Tokyo in search of a life different from that of his parents. Since then he has forcefully carved out a space for himself in the culture as a modernist poet, a raging folk singer, an author, a actor, an engaging TV personality, and one of Japan’s most uniquely powerful performers.
For most of Mikami’s career as a singer, he has performed solo. Just him and his electric guitar against the world, creating jagged A-minor vamps to drive along the surreal wisdom of his lyrics. But he’s equally at home in more demanding improvisational contexts such as those provided here by John Edwards on bass and Alex Nielson on drums. Their dense propulsive textures seem to spur on Mikami, his voice arcing powerfully into fragmented spaces, his guitar darting, colliding, shedding jagged and angular splinters of sound. A pulsing, raging maelstrom of serrated-edged energy. Gruff, rough, honest and very, very real.