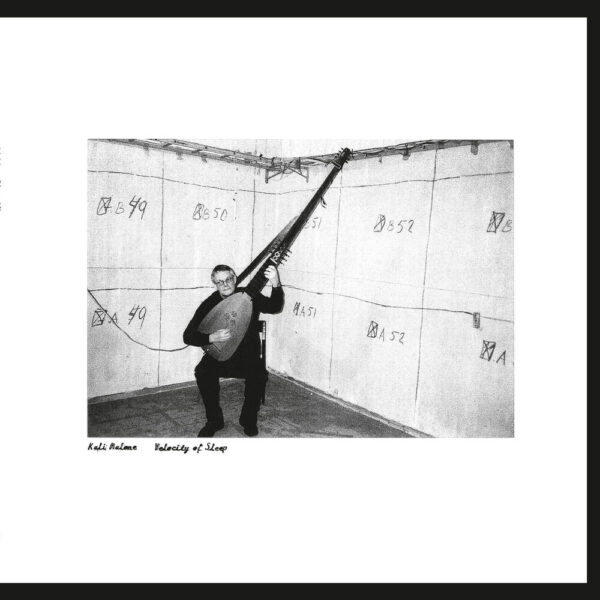 Composed, recorded and produced in Stockholm 2015-2016, ‘Velocity of Sleep’ sees Kali Malone’s work rendered in a septet of strings, gongs, lute, electronics and tape in the vast R1 Reaktorhallen (Sweden’s first nuclear reactor), the electroacoustic studio EMS, and at the Royal College of Music in Stockholm. Her presence is crucial, and liminal, making precise use of tuned sine waves and Studer B67 tape manipulation, while instrumental performance is handled by Peter Söderberg performing on the long-necked Theorbo (a large baroque lute, pictured on the sleeve), Samuel Löfdahl and Oskar Mattsson on Gongs, Vilhelm Bromander on Double Bass, Marta Forsberg on Viola and Adam Grauman on Viola de Gamba – all uniting to produce what feels like a geological time lapse and distillation of European and Indian classical drone musicks.

As far as opening solo statements go, ‘Velocity of Sleep’ is among the most memorable to have emerged this past decade from slow music and experimental classical paradigms. Its languorous yet rigorous consolidation of ideas from across the aeons crosses paths with others before her – the musics of Pauline Oliveros, Phill Niblock, Harley Gaber, Oren Ambarchi all spring to mind – but more importantly helped reset the limits of contemporary music in Malone’s own image. The 3-part, 43 minute work is an ideal example of how staid notions of early and classical music have been jettisoned to instead focus on fundamentals of tone, timbre, tuning, space and temporality with a radical and transfixing effect coolly detached from any directly traditional/sacred meanings.

Peter Söderberg’s justly tuned Theorbo plucks a slowly evolving additive pattern expanded by frippertronic tape delays on the 20 minute title piece, setting a stark tone for a quietly breathtaking resonance of gongs and floating sine waves in ‘1113’ that rest right on the biting point of sublime dissonance, while ‘In Light of Marwa’ pitches into a sort of raga-folk-drone tuned with the fine, durational intensity recalling Harley Gaber’s ‘The Winds Rise In The North’ and earthy cadence of Pauline Oliveros’ vision, yet somehow concentrated, refreshed in a way that’s best felt, and quite impossible to describe.