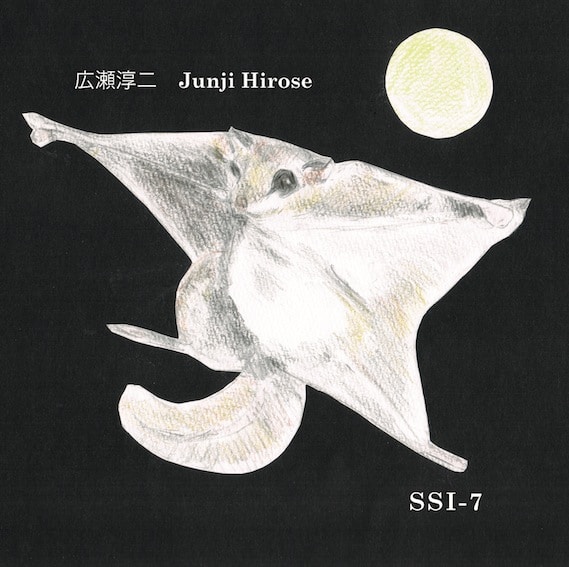 A leading sax player on the Japanese improvised music scene, Junji Hirose also plays his own self-made analog noise instruments. In the 1980s he started giving noise performances using his SSI (self-made sound instrument), created by combining everyday objects. Over the years he has remodeled the instrument a number of times, each time adding a different number to the name “SSI.” Hirose’s CDs SSI-4 (hitorri-997, 2013), SSI-5 (hitorri-993, 2015) and SSI-6 (hitorri-990, 2016) have been released on the Hitorri label. His new album featuring the SSI-7, recorded in December 2018, is now out.
Balls and other small objects are placed on a large, shallow, round metal plate. These objects are covered with a metal plate of the same type and size which is placed and secured in such a way that it seems to be subtly floating. With the use of an air compressor, blasts of air hit the instrument from various angles. The compressed air streaming between the two metal plates causes the objects in between to move around in a dynamic way. The noise of the air compressor, the sound of the compressed air hitting the metal plates, and the sounds produced by small objects moving around and hitting the metal plates all combine to produce a complex and dazzling conglomeration of sound. The album is made up of four tracks, and the sonic atmosphere of each track is altered through the use of different types of small objects. On the final track, no objects are placed between the metal plates; the compressed air hits only the plates. This album overflows with Hirose’s creative dynamism and abundant originality.