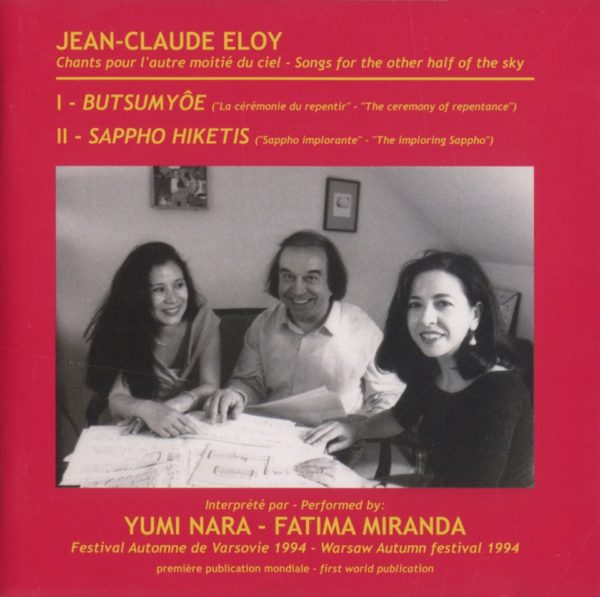 A book (English or french text) around the cycle “Songs for the other half of the sky” with the following pieces “Butsumyoê”, “Sappho hikètis”, “Erkos”, “Galaxies”, “Gaia-songs”. Interview, documents, technicazl specification, photos. A CD with “Butsumyoê” and “Sappho hikètis”.

“Butsumyôe” (1989). For voices, percussions and electroacoustic. With Yumi Nara and Fatima Miranda, voice and percussions. In “Butsumyôe” (”The ceremony of Repentance”) the singer Yumi Nara (soprano) occupies the function of a first solo voice, whereas Fatima Miranda (vocalist) assures the function of the second accompanying voice. In Sappho hiketis, it is the opposite: Fatima Miranda occupies the function of the first solo voice, and Yumi Nara assures the function of the second accompanying voice. But in practice, the vocal activities are mixed, creating an actual creative vocal duet. These two works are freely conceived and of pure imagination, which lean on not any pre-existent “model”. Butsumyôe is a long monologue for voice that sings, speaks, shouts, and is modulated with a host of techniques, punctuated by the exclamations of the accompanying voice and by various percussion instruments played by the two female singers. Basing myself on Saïkaku’s beautiful text, I have worked in the original language (ancient Japanese from the area of Osaka), striving to magnify the expressive capacity of each word. The point is to cause Western vocal techniques to expand towards more expressive possibilities, particularly in the very difficult and rich space between “sung” and “spoken” texts. Curiously, the recent practice of electro-acoustic techniques sheds light on these issues, forcing us to rediscover the acoustic, whose perception and conception had been gradually obscured, standardized and diminished by our cultural certainties.
“Sappho hiketis” (1989). For voice, percussions and electroacoustic. With Yumi Nara and Fatima Miranda, voice. A vocal duet articulated from an electro-acoustic piece (realized during the production of Anâhata at the Electronic Studio of the Sweelinck Conservatory in Amsterdam). The basic material is composed of pre-recorded metallic percussion instruments (samplings realized in 1984 by Michael W. Ranta).
Prosody and vocal technique: unlike the previous piece, the text is used in a very broken up mode, with somewhat scattered phonemes, also integrating a listing of the names of Sappho’s most famous female lovers. The adaptation of the text (in modern Greek) is totally free and makes no reference to the metrics or musical modes allegedly used by Sappho.