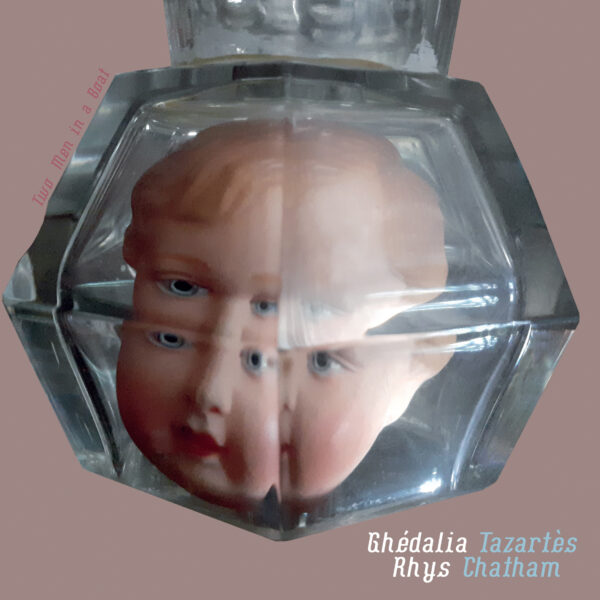 “The beauty of all this, as well as its sorrowful brutality, is even more powerful and stupefying since Ghédalia’s sudden departure. Because retrospectively, not only is this recording the trace of a rare moment in a Parisian garden, it also summons a ghost, that of a loved one that is gone, and of his voice, which is fully alive here.”

Tazartes and Chatham had met once in 1977 at CBGC’s and had not seen each other since then when they were asked by their mutual agent to play a private show in Paris. This happened in September 2018 in a house with a garden where sax player Steve Lacy had lived back in the 1990s. This album presents the recording of this show plus another show at La semaine du bizarre festival in Montreuil, France a year later, mixed with a couple of studio sessions. This was probably the last music Tazartès, who died in February 2021, recorded. His unique singing blends perfectly with Chatham’s loops on electric guitar, trumpet and flute.

Rhys Chatham is a composer, guitarist, trumpet player and flutist from Manhattan, currently living in Paris, who altered the DNA of rock and created a new type of urban music by fusing the overtone-drenched minimalism of the early 60s with the relentless, elemental fury of the Ramones — the textural intricacies of the avant-garde colliding with the visceral punch of electric guitar-slinging punk rock. Starting with Guitar Trio in the 1970s and culminating with A Crimson Grail for 200 electric guitars in 2009, Chatham has been working for over 30 years to make use of armies of electric guitars in special tunings to merge the extended-time music of the sixties and seventies with serious hard rock. Parallel with his rock-influenced pieces, Chatham has been working with various brass configurations since 1982, and recently has developed a completely new approach to collaborations, improvised and compositional pieces involving trumpet through performances and recordings that started in 2009. Chatham’s trumpet work deploys extended playing techniques inherited from the glory days of the early New York minimalist and 70s loft jazz period. Starting in 2014, Rhys has been touring a solo program featuring an electric guitar in a Pythagorean tuning, Bb trumpet, and bass, alto and C flutes. Rhys was introduced to electronic music and composition by Morton Subotnick in the late 60s, and in the early seventies he studied composition with La Monte Young and played in Tony Conrad’s early group. These composers are, along with Terry Riley, the founders of American minimalism and were a profound influence on Chatham’s work. Chatham’s instrumentation ranges from the seminal composition composed in 1977 entitled Guitar Trio for 3 electric guitars, electric bass and drums, to the epoch evening-length work for 100 electric guitars, An Angel Moves Too Fast to See, composed in 1989… all the way to Chatham’s recent composition for 200 electric guitars, Crimson Grail, which was commissioned by the City of Paris for La Nuit Blanche Festival in 2005. A completely new version of the piece was commissioned by the Lincoln Center Outdoor Summer Festival in 2009. What does a composer do after mounting many performances with forces of 100-200 electric guitars? The composer gets back to basics, at least that’s what Rhys does! Along with the G100 and G3 programs, Chatham is currently offering a solo program, an evening length work with the composer performing himself on electric guitar, trumpets and bass alto and C flutes.

French cult artist Ghedalia Tazartes is an uncompromising character who defied categorization. He recorded alone more than 20 albums, calling his Art “Impromuz” for lack of a better term. Before the years 2000s, his public appearances remained exceptional events. Ghédalia Tazartès’ music has always been a mystery. It switches from musique concrète to – existing or invented – ethnic music, from poetry to noise, or from loops and collages to sad and extremely beautiful tunes in a second, but it constantly is in flux and coherent. In 2004, Ghedalia finally decided to do live performances again. He first worked with other musicians (Les Reines d’Angleterre, David Fenech & Jac Berrocal, Norscq & Black Sifichi, Nicolas Lelièvre) then went solo for ten years. Since then Tazartes has played many shows across Europe including a show in the Patti Smith exhibition at Fondation Cartier in Paris and a cinemix to the “Haxan” silent movie in 2008. In 2018 Ghedalia decided to stop playing solo and to collaborate with other musicians again: Maya Dunietz, Rhys Chatham, Chris Corsano and Dennis Tyfus, Quentin Rollet and Jérôme Lorichon. Ghedalia died at his home in Paris on 9th February 2021.