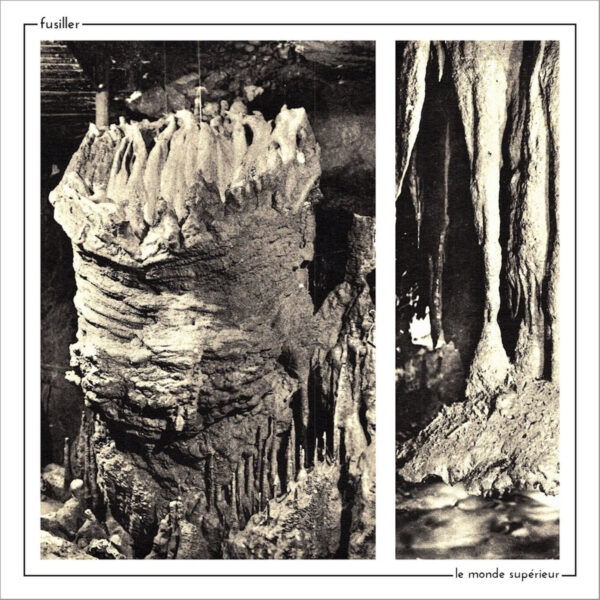 Fusiller does music with crafted electronic instruments of his own. His work is chirurgical, precise with everything under control. Nothing is unnecessary.

From some underground world, I hear a debate within GRM pioneers.
Pierre Schaeffer : ” I like this succession of miniatures, it sounds like études, but it’s all electronic, such a shame”
Bernard Parmegiani : “I wonder why I didn’t use this kind of voices in L’enfer ?”
François Bayle : “Here is a composer”
Luc Ferrari : “Oh, there is some kind of humour here !”
Pierre Henry : ” Well, I’ve done better work”

Behind the name Fusiller we find Jo, who runs the Tanzprocesz label. He is also one half of Opéra Mort, Femme and one third of Reine d’Angleterre. However, the latter may not be an ongoing concern anymore since the passing of Ghedalia Tazartes. Fusiller created his own electronic instruments and loves to edit his music until whatever is there is necessary. There is a funny little text on Bandcamp about this LP (or 12″? It spins at 45 rpm, but still is about 32 minutes), with imaginary quotes from French luminaries from the world of electronic music. The two Pierre’s, Paremgiani, Bayle and Ferrari, perhaps indicate that we should see the pieces in that tradition and not in the tradition of noise music. You could easily think that some of this music is in that tradition of noise music, but this is not your (standard?) noise wall type. For one, this is not something that deals only with heavy noise. It also works with very brief pieces of music. In the download, they are cut together as one track but listen to the record, and you’ll notice that each piece is a rounded thing by itself. Fusiller uses organ-like sounds, as drones as rapid arpeggio’s (none of the pieces have a title, so I can only say, ‘that bit on side 2’). Still, there are oscillating sounds and sine waves, and the record again goes into total noise territory, microphone and voice abuse. Why not an imaginary quote from Henry Chopin (not connected to GRM, but surely in his tradition). A noise track like this can be thirty seconds before it leaps back into the controlled chaos of modular electronics. It’s hard to say if the people at GRM might laugh at this, dismiss or applaud it. If I’m honest, I’d say, why would Fusiller care what they think? Or I, for that matter? Oh, right, they do care what I say, as I got the promo. I very much enjoyed this LP (12″?) for its brief character. Miniatures or etudes, whatever you wish to call these, Fusiller aims and shoots all the time, bull’s eye. (FdW)
VITAL WEEKLY issue 1314