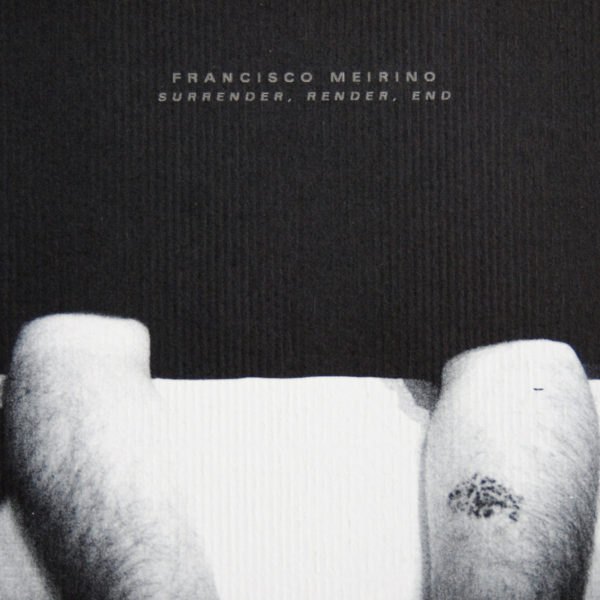 First and foremost, Surrender, Render, End is an electro-acoustic dialectic, unremittingly engaged in a pugilist conflict between art and accident. The Swiss noise-composer Francisco Meirino began working on the skeleton for this piece in 2014 as a multi-channel, modular synth patch, which has been in an ongoing state of modification through public diffusions and private rumination. Meirino posits the album as a metaphysical puzzle of manipulated tape, atonal synthesis, and concrete sound. He is quick to point out that these are more than field recordings, better stated as an extreme amplification of natural phenomena. All of this twists and turns through a shifting of perspective, akin to the cinematic tropes of objectivity and subjectivity in the framing of the image; but here it is with hostile topography of sound interacting with the human mind, body, and spirit. The allusions within Surrender, Render, End are numerous and for the most part are fleetingly abstract, like the fragments of a nightmare that linger days after. The research laboratory, abandoned with all of the instruments running after an experiment became toxic and started to metastasize. Nerve-endings rupturing from sensory overload. The residual psychic violence of a time and place that’s forgotten history. The one recognizable human utterance: “I’ll never know anything.” Meirino’s work has long been at the forefront of sonic exploration, with Surrender, Render, End being a masterful work built upon many years of dedication to his craft, with countless performances, residencies, collaborations, and publications. Think Luc Ferrari, Peter Tscherkassky, and the aktions of the Schimpfluch-Gruppe.