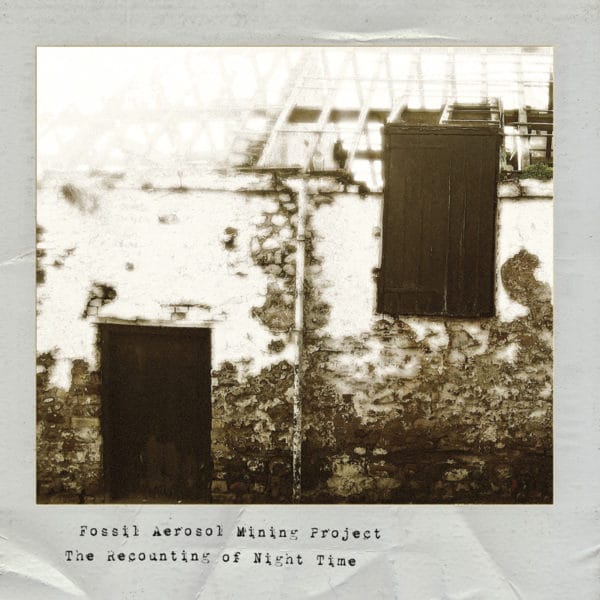 "The Recounting Of Night Time"

“For over three decades now, the Fossil Aerosol Mining Project has patiently sifted through the damaged remains and bygone refuse from the late 20th century pop culture of America. Mining the snippets of audio found from abandoned drive-in theaters, mangled VHS tapes, and discarded cassettes, Fossil Aerosol studiously pieces together empathic, haunted abstractions of their original source material. their cryptic sound collages address the continued ramifications of the inherent paranoia from the cold war dissonance of stark morality and nuclear apocalypse.

The Recounting of Night Time begins and ends with the scratchy melodies from a well-worn violin. echoes and their amplifications from this instrument gradually subsume the original amidst cascades of tape manipulations and time-delay techniques. This motif repeats through the album with profound emotional torpor through fossil aerosol’s hypnotic cycles of foggy ambience and back-masked rhythmic events that intertwine with varispeed-pitched dilations of melancholy melody. It makes for a beautifully corroded smear of sound, recalling the works of William Basinski and Fossil Aerosol’s occasional collaborators :zoviet*france:

The Recounting of Night Time was composed and mixed in October of 2014. The source material focuses principally on a certain piece of German gothic cinema made during the late 1970s. This material was culled from both VHS audio tracks, as well a “field recording” made at a poorly-attended screening of the film in a decaying theater in St. Louis, Missouri sometime during the mid-1980s. Evidence of video control track glitches are present, while the scent of the acutely mildewed theater is recollected and implied.

A special edition of the CD, limited to only 50 copies, will also be available via Helen Scarsdale, and also from Afterdays Media. This edition consists of shrink-wrapped CDs overpainted in chalkboard resurfacing paint, erased chalk, acrylic, and a hand-lettered Bandcamp download code for an additional 18+ minute track.”