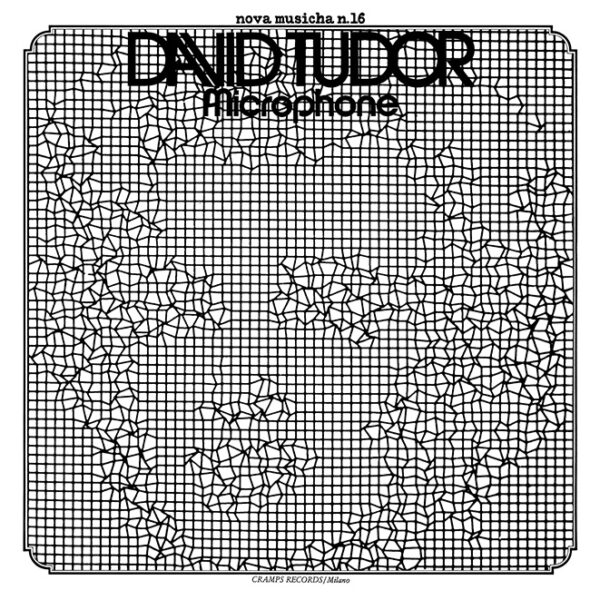 At long last, after decades out of print, the Milan based imprint, Dialogo, dives into the legendary catalog of Cramps, bringing forth the first ever vinyl reissue of David Tudor’s legendary LP, “Microphone”, part of an ongoing initiative dedicated to bring the imprint’s seminal output back into the light. Still mind-blowing nearly half a century after it was first released, now complete with a new English translation of the album’s original liner notes, this is just about as exciting as reissues come and not to be missed.
Edition of 300 LP on black vinyl. Audiophile pressing, including printed inner. Perfect replica of the original packaging and newly remastered for optimal sound.
The only source of Microphone’s sound is the modulation of a microphone feedback produced in a distant echo chamber. The incidence and duration of the sounds are produced by the action of extremely close (narrow band) peak/notch filters (used in both modes), inserted into the lead signal. Each of the 9 versions is performed by the composer and simultaneously recorded on four tracks. Then the four tracks are spliced onto two, using a pan-matrix. The final product is a library of 9 stereo tapes, each about 32 min. long, which can be used in any combination, for live performances or for electronic installations. In these performances the tapes are played and stopped at any point, rewound and played again, altered in amplitude and/or equalisation, rotated on any given channel, etc., at will, for any period of time.
A live performance of Microphone (for instance without tapes) can be achieved by employing (a minimum of 4) performers using duplication systems, each one with 2 speakers.
This 1973 instantiation of Microphone covers a work originally conceived for the Pepsi Pavilion of Expo ‘70, in Osaka, Japan. Conceptually, the original work derives from discoveries made through the composer’s collaboration in the design of the Pavilion’s acoustic system. Sound diffusion was achieved through the use of 37 loudspeakers placed in a rhomboid grid system covering 3/4 of the sphere.
The loudspeakers could be “temporalised” at the entrance and exit of sounds, at variable speeds, following predetermined spatial models. The composer experimented with highly directional microphones, randomly pointed in space and amplified at the feedback level. The resulting signals were controlled in incidence and duration solely by the action of the loudspeaker’s temporaliser. Modulators, with variable features, designed and incorporated into the sound system by Gordon Mumma, were placed in the lead signals in order to vary the musical content of the feedback signals.
These experiments, although carried out through a compositional process, were not recorded in the Pavilion, due to the presence of “ambient noise” created by the multiple electrical fields. However, since the “tuned space” concept is now involved in Tudor’s compositional processes, the work could be recovered using variable bandpass filters (but capable of accommodating or excluding a cycle), and “q” variables, such as “tuning” elements, instead of operative loudspeakers. The used filters are manufactured by Ling Electronics, California.

The original tapes for Microphone were recorded in May 1973, at the Mills College Centre for Contemporary Music, using funds from their multi-track recording research project.
The recordings were conducted by Robert Sheff, with assistance from John Bischoff.
The two versions of Microphone featured in this recording were made with the assistance of the ZBS Foundation, Fort Edward, New York. Such grants were possible thanks to the public funds from the New York State Council of the Arts.