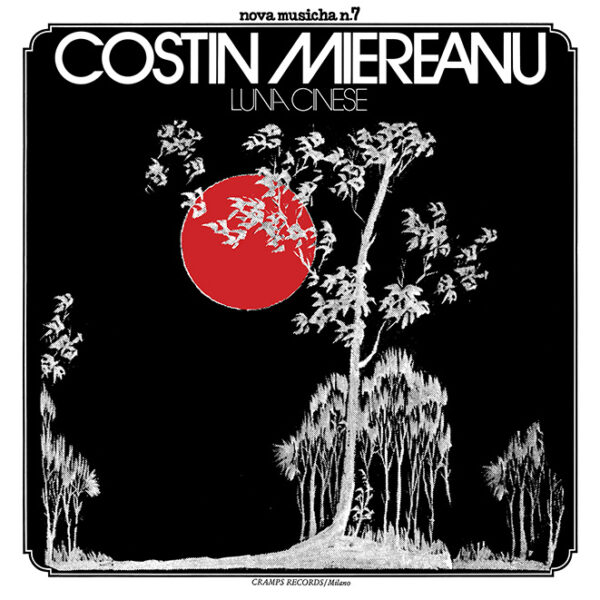 At long last, after decades out of print, the Milan based imprint, Dialogo, dives into the legendary catalog of Cramps, bringing forth the first ever vinyl reissue of Costin Miereanu’s “Luna Cinese”, part of an ongoing initiative dedicated to bring the imprint’s seminal output back into the light. Easily one of the most singular and important experimental albums of the 1970s that remains as engrossing, creatively riveting, and as ahead of its time today as it was in 1975, this is as exciting as reissues come. Complete with new English translation of their original liner notes.
Edition of 300 LP on black vinyl. Audiophile pressing, including printed inner. Perfect replica of the original packaging and newly remastered for optimal sound.
The course of Luna Cinese (side X or Y) consists of continuous low-density repetitions – the kind of “woven” silence you find on mountains – occasionally disturbed by irregular and very dense insertions – the kind of intense noise you find in the city.
The purpose of these subsequent insertions is, on the one hand, given their relentless character, to deceive any desire of discovering a linear evolution, and on the other hand, due to their composite nature (= stasis of the present moment, in which past-present-future are mixed, as in a tourbillon), to break the straight-forward logic of development, thus assuming working as an interference. It is not about a “negative”, aphasic interference, but on the contrary a ‘positive’ burst of quantitatively immeasurable super-memorization.
Hence a constant ambiguity in the text’s montage – scattered fragments or a continuous series of rings as in a rosary: several stories develop together or in parallel lines, without being able to know which one is the real one. This kind of development recalls those tales – apparently all true and based on the same real facts, although they change from time to time – which are told on different occasions by those people who, in medical terms, are said to suffer from a certain mental disorder. Artistically speaking, I believe that such examples speak of an extraordinary ability to produce surrealism in its pure and/or unconscious state. Basing my work on this kind of ‘schizoid’ development, I have recently produced a number of “plural” works, which are both sonic and visual.
The formal structure of Luna Cinese (side X or Y) is circular and symmetrical on all sides, like a sphere that could be spun in any direction without shaking its perfect balance, transient and smooth as it is. It is a simple dreamy image of a sphere rotating around an axis that is itself the object of a rotating motion. It is likewise the simple, mechanical image of a spinning disc.
Semantically speaking, it is the superimposition of concentric spherical layers, like parallel, autonomous levels – a bit akin to geological strata’s curves. Many stories (German text) gravitate independently from each other around this sort of centre. They appear as fast as meteors (once only) or in subtle ways (2 to 7 times), creating a linear discourse and thus a meaning through disparate fragments, only to then destroy (erase) it, or to repeat the same mood over and over again, etc.
Such texts, short and to the point, will trigger, at each burst-flash, characteristic musical mini-situations that will always accompany them as involuntary leitmotifs.
Cooking recipes, childish songs, sarabandes of messy memories, mental transcriptions of actual or only imaginary discussions, will cross their paths in a rather sophisticated and structuralist montage. A musical science fiction tale, built from the smallest and most insignificant elements of everyday life.
A reading over time could, among other things, show a slow motion photoflash from “Journey to the Centre of the Earth”, an initiation journey towards the discovery of the idea of “centre”, the erotic-hermetic symbolism of the “shell”, the spiral of Marxist dialectics, the mechanical operation of the record player, the needle passing through coil after coil until the final stop, the empty centre, the silence of sound, the absence of music. Now, it is here that the initial ambiguity finally blooms: what do we find at the bottom of this “final” point, of this centre, shell, cul de sac or mantra? First of all, the progressive cancellation of every sonic being and the clear enunciation of the title itself, Luna Cinese (“Kinesische Mond”, “lune chinoise”, “Chinese Moon”) – a large and round flying disc. Theoretically, we can call the record’s A or B side a meaning-making process, a creeping or nascent process. Through a progressive (re)discovery that reached the title itself, we have now achieved a sonic seeding.