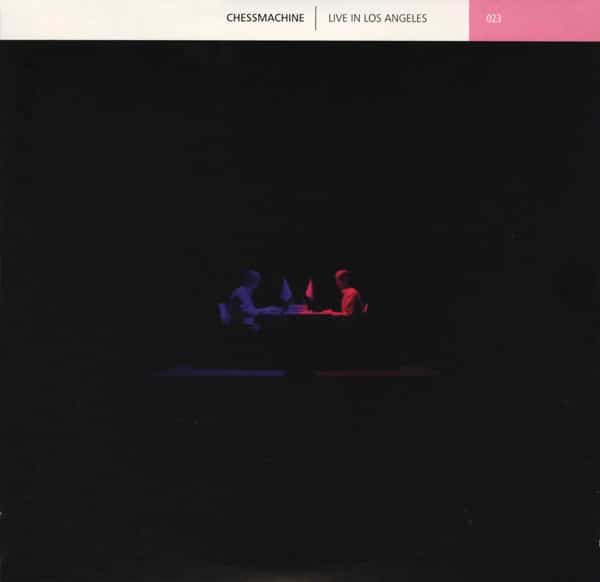 “Edition of 600. Line is proud to present Live in Los Angeles by the collaborative performance project Chessmachine by Richard Chartier (US) and Ivan Pavlov (aka COH) (RUS). A certain humor shapes the conceptual dialectics of the Chessmachine live experience. Their interplay suggests the historical confrontation of East and West; an austere and chilling tete-a-tete over the chessboard that reconstructs the somber milieu of a bygone Europe, even as it conveys a kind of absurdist levity through the rehearsed performance of these roles. The use of MAC and PC computer operating systems by Chartier and Pavlov, respectively, becomes the late-20th century manifestation of classic Cold War combatants. Through their engagement, a process of sonic and aesthetic displacement unfolds, such that one player’s strategic manipulation of sound begins slowly to affect and then determinatively shape the compositional technique of the other. Chessmachine‘s live performances take place in real time with color coded staging, uniforms, lighting, and video projections designed by Russian-American installation/video artists Evelyn Domnitch and Dmitry Gelfand.
Ivan Pavlov is a former acoustic engineer from Russia, currently resident in Sweden who has been releasing his work under the name Coh (Russian for “sleep” and “dream”) through various record labels including Raster-Noton (DE), Mego (A), Eskaton (UK), souRce-reSearch (UK), IDEA (USA), Wavetrap (UK/SE), Staalplaat (NL) and Error (RU). His work is distinguished by the somewhat emphasized emotional content of the sound forms as well as a certain level of humor in both concepts and execution. He has collaborated with artists Coil, Cylobe, Annie Anxiety, and Richard Chartier.
Richard Chartier, sound/installation artist has created critically acclaimed recordings for labels such as 12k/LINE (USA), Trente Oiseaux (Germany), Spekk (Japan), and Fallt (Ireland), including collaborations with artists Taylor Deupree, William Basinski, COH, and *0 and has appeared on numerous international compilations. His digital minimalist work explores the inter-relationships between the spatial nature of sound, silence, focus, and the act of listening. In 2000 he formed the recording label Line and has since curated its continuing documentation of compositional and installation work by international sound artists and composers exploring the aesthetics of contemporary and digital minimalism. The first release on Line, Chartier’s Series as awarded Honorable Mention in the category of Digital Music by the prestigious Prix Ars Electronica, 2001 (Austria). The video element of the live Chessmachine performance was created by Russian/American video and installation artists Evelina Domnitch + Dmitry Gelfand.” label info