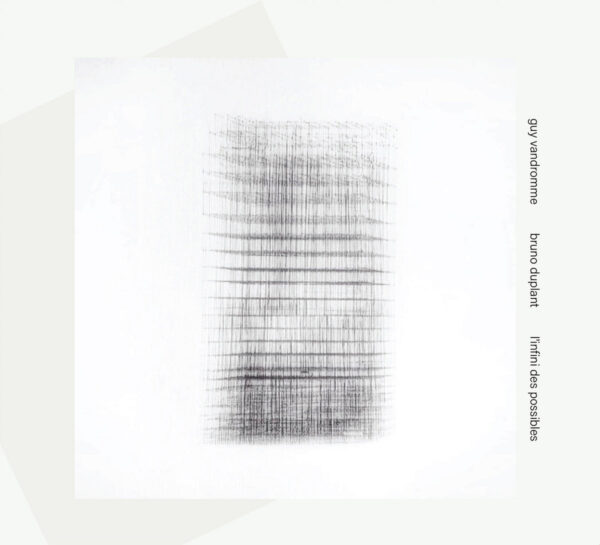 “l’infini des possibles” is a set of twelve studies for solo piano, written by French composer Bruno Duplant in 2019. The Belgian pianist/conductor Guy Vandromme intensely studied these 12 pieces via in-depth discussions with Duplant over two years, and realized them for this recording of a double CD in the spring of 2021. Mixed, mastered by Bruno Duplant.

From the liner notes by Michael Pisaro-Liu :
“Let’s begin with a proposition: as finite beings, it is impossible for us to have a real experience of the infinite. If that is the case, how does an artwork create a representation of the infinite?
One way is to introduce an infinite potential in the process of finishing the work. A score is indeterminate when it leaves critical decisions for the performing musician. Those decisions compound and quickly add up to a very large number. If one had to make each decision consciously, through calculation, it would take a lifetime to learn to play an indeterminate piece like ‘l’infini des possibles’. Luckily, in practice, the musician is guided, inevitably, by his own instincts. He makes many decisions quickly and unconsciously, adapting patterns he already has in his hands and in his ears.
Bruno Duplant’s score consists primarily of lowercase letters (a, b, c, d, e, f, g). The letters stand for the “white keys” of the piano. Periods and spaces are placed in the letter stream to give a suggestion of phrasing. Occasionally these letters are affected by accents, uppercase shifts, cédilles and apostrophes, with each of these marks open to interpretation. A line of letters should last about one minute. Each étude consists of a single page of eight lines. While the order of the letters is fixed, their combinations and repetitions are determined by the performer. What looks like melody can become harmony; what appears to be simple, can become complex. The performer is asked to play “soberly, slowly and with a sweet melancholy.”
Given the openness of this score, much of the feeling and atmosphere will be the result of a set of substantive artistic determinations made by the pianist. “How much do I use the pedal? Does it sustain, feather or stop completely at the end of this phrase? Precisely how long do I wait before the next note? Are these two letters to be played together or separate? In the same octave or an octave apart? Perhaps three octaves apart? How do I make a rhythm that turns this stream of letters into a figure? Do the a and g ring long enough to harmonize with the e?” There are thousands of such decisions to be made in each of these études.
What begins as a black-and-white figure drawing ends as a hand-colored portrait. Those colors are beautiful: subtle, shaded, nuanced, detailed. Through the sensitive touch of Guy Vandromme, the potentials of the score acquire dimension and expression. In his touch the listener, teetering at the edge of an abyss of sensation, might occasionally feel the hidden specter of the infinite.” – Michael Pisaro-Liu (2021)