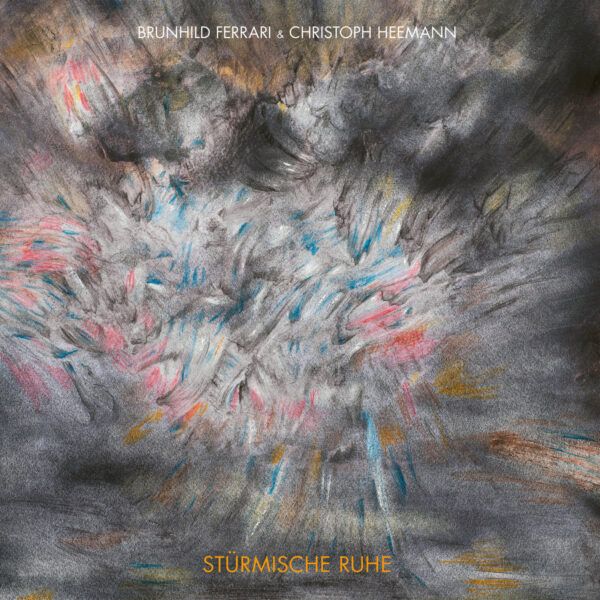 After her stunning collaboration with Jim O’Rourke (Le Piano Englouti, BT055), Brunhild Ferrari returns to Black Truffle with Stürmische Ruhe, her first duo with Christoph Heemann. A legendary figure in underground music, Heemann has quietly produced a unique body of work since his beginnings with the absurdist cutups of H.N.A.S. in the mid-1980, including collaborations with Merzbow, Organum and Nurse With Wound, the eerie psychedelia of Mirror (with Andrew Chalk), In Camera (with Timo van Lujik) and Plastic Palace People (with Jim O’Rourke), and the precise cinema pour l’oreille constructions of his solo works. Created together in Ferrari’s Parisian studio (once shared with Luc) between 2011 and 2014, Stürmische Ruhe is a single half-hour piece that folds rain and storm recordings into a intricately woven fabric of haunted electronics, unexpected edits and disorienting processing. Banging with the jarring thump of a slamming door (an element that will reappear periodically throughout the piece as a kind of punctuation mark), it is immediately obvious that concrete sound is used here in a free, poetic way outside of the strict confines of documentary field recording. The wind captured by Ferrari’s microphone roars and whistles, accompanied by thick clusters of wavering tones whose unpredictable rises and falls in volumes are synchronised with the bumping and thudding of windows and doors. At some points the microphone sound melts into a wavering low-bit digital smear before fanning out into broad, atmospheric depths. The cinema for the ear constructed here suggests not linear narrative or documentary, but an organic flow of cross-fades, double-exposures and abrupt cuts, a free-associative dream in which wind and water take on mythical characteristics. Throughout the piece’s second half, layers of synthetic floating tones and pinging upward glissandi negotiate a constantly shifting balance with wind-borne whispers and rustles, at times dropping to silence, at others rising up with elemental force. As Ferrari explains in her liner notes, Stürmische Ruhe is a meeting of ‘completely opposite sound worlds’ in which ‘almost-violence’ is joined with a ‘reconciling harmony’. Reaffirming the infinite possibilities of the musique concrète tradition while avoiding its academic tropes, Stürmische Ruhe is accompanied by tri-lingual liner notes from Brunhild Ferrari and arrives in a sleeve graced with the beautiful art informel paintings of her father, Wolfgang Meyer Tomin. Cut at 45rpm for maximum fidelity.