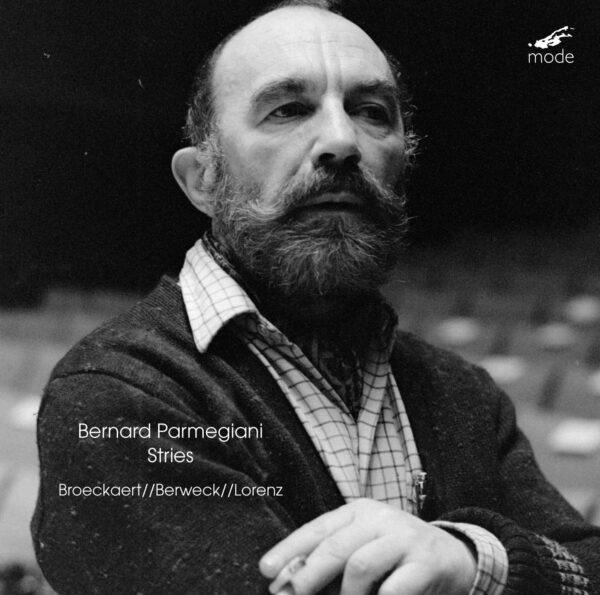 Bernard Parmegiani (1927–2013), the grand old man of French electroacoustic music, did not write much music for tape with live performers. Among them is “Stries” for the unusual combination of three live synthesizer players and tape.

Until recently, “Stries” had not been played live for some 30 years. This is the first complete recording, only part of it had been previously released on LP on the INA/GRM label.

“Stries” was written for the three synthesizer players of the Paris-based electroacoustic trio TM+, Yann Geslin, Laurent Cuniot and Denis Dufour, founded at the INA/GRM. Over the span of the ensemble’s lifetime, TM+ used a range of different instruments — analog synthesizers in the late 1970s and early digital synthesizers in the mid-1980s — and amassed a repertoire of about 40 compositions written especially for them.

Armed with this material, the electronic music trio of Colette Broeckaert, Martin Lorenz and Sebastian Berweck, together with Yann Geslin, recreated the piece with the aim of bringing it back to the stage as well as producing generic scores that could help get the piece into the repertoire of many instrumentalists. Their work is realized on this release.

“Stries” (1980) is a work in three parts based on the tapes of Parmegiani’s “Violostries” for violin & tape from 1963. The tape part is derived completely from recordings of the violin which Parmegiani masterfully alters to create an at times extremely dense, at other times pointillist piece of music.

The first part, “Strilento,” is a piece for tape solo and can as such be played alone, while the second and third movements — “Strio” and the eponymous “Stries” — make direct usage of the old tapes and the analog synthesizers of the players.

Sebastian Berweck’s liner notes detail the reconstruction of “Stries” for both performance and this recording.